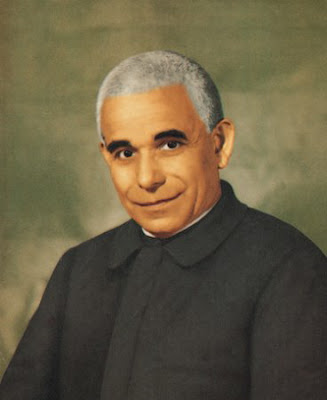 Luigi Orione was born in Pontecurone, Diocese of Tortona, 23 June 1872. At 13 he was received into the Franciscan convent in Voghera (Pavia) who left after a year for health reasons. From 1886 to 1889 he was a student of St. John Bosco in Turin Oratory Valdocco.
On October 16, 1889 he entered the seminary of Tortona. While still a young priest, he devoted himself to live in solidarity with the fellow in the Society of Mutual Help in San Marciano and St. Vincent. On July 3, 1892, opened the first Oratory in Tortona to care for the Christian education of youth. The following year, on 15 October 1893 Luigi Orione, a clergyman of 21 years, opened a school for poor boys in the neighborhood of San Bernardino.
On 13 April 1895 Luigi Orione was ordained a priest and at the same time, Bishop won the clerical habit to six students at his school. Soon, Don Orione Mornico opened new homes in Lausanne (Pavia), in Noto (Sicily) in Sanremo, in Rome.
About Founder grew young clerics and priests who formed the first nucleus of the Little Work of Divine Providence. In 1899 started the branch of the Hermits of Divine Providence. The Bishop of Tortona, Bishop Igino Bandi, with Decree of 21 March 1903, canonically recognized the Sons of Divine Providence (priests, brothers coadjutor and hermits), male religious congregation of the Little Work of Divine Providence, dedicated to "cooperate to bring the young, the poor and people of the Church and the Pope, through works of charity, IV professing a special vote" allegiance to the Pope ". In the first Constitutions of 1904, a new purpose of the new Congregation appears to work "to achieve the union of the separate Churches.
Driven by a passion for the church and the salvation of souls, took an active interest in the problems emerging at that time, such as freedom and unity of the Church, the 'Roman question', modernism, socialism, Christianization of the working masses.
He has helped heroically to populations affected by the earthquakes of Messina and Reggio (1908) and by the Marsica (1915). By desire of Pius X was vicar general of the diocese of Messina for three years.
At twenty years of the founding of the Sons of Divine Providence, as in "a single plant with many branches," the June 29, 1915 began the Congregation of the Little Missionary Sisters of Charity, animated by the same charism and in 1927 the blind Sacramentine Adoration Sisters, which is added after the Contemplative of Jesus Crucified.
He organized the laity in the associations of the "Ladies of Divine Providence", the "Alumni" and "Friends". Then the body will Orionini Secular Institute and the lay movement Orionini.
After the First World War (1914-1918) was a proliferation of schools, colleges, agricultural settlements, charitable and welfare. Among the most characteristic works, created the "Small Cottolengo" to the suffering and the abandoned, encountered in the outskirts of large cities as "new pulpits" from which to speak about Christ and the Church, "beacons of faith and of humanity. "
The missionary zeal of Don Orione, who had already spoken with shipping to Brazil in 1913 of his first religious, then spread to Argentina and Uruguay (1921), England (1935) and Albania (1936). In 1921-1922 and 1934-1937, he made two trips to Latin America, Argentina, Brazil and Uruguay, reaching Chile.
He enjoyed the esteem of the Popes and the authorities of the Holy See, who entrusted him with numerous and sensitive assignments to solve problems and heal wounds both within the Church and in relations with the civilian world. He was a preacher, confessor and tireless organizer of pilgrimages, missions, processions, "living nativity" and other demonstrations of faith. Very devoted to the Virgin, her devotion promoted by all means and with the handiwork of his clergy, he built the shrines of the Madonna della Guardia in Tortona and Our Lady of Caravaggio in smoke.
In the winter of 1940, trying to alleviate the problems of heart and lungs in pain, went to the house of Sanremo, though, as I said, 'is not among the palm trees where I want to live and die, but among the poor who are Jesus Christ. After just three days, surrounded by the love of his brothers, Don Orione died on 12 March 1940, sighing "! Jesus! ! Jesus! I '.
His body, intact at the time of the first exhumation in 1965, was put in a place of honor in the sanctuary of the Madonna della Guardia in Tortona, after that, on 26 October 1980, John Paul II inscribed her name in the cast of the Blessed.
His Holiness John Paul II canonized him on May 16, 2004.He was the founder of the Little Work of Divine Providence and the Congregation of the Little Missionary Sisters of Charity.He is an incorruptable

Prayer
Father may St.Luigi Orione
help us have a greater love
to the Eucharist and our
Blessed Mother the Virgin Mary.
We ask this through Christ our lord.
AMEN