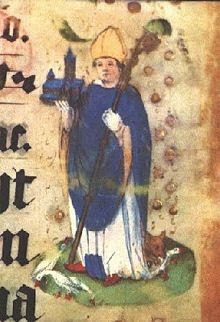 The story of St. Ludger, first bishop of Münster, born about 745 in Suescnon, Friesland, is attached to a new fact in the Christian world at that time Christianity went far beyond the Roman Empire, with the evangelization of trans / Rhenine Germania . This missionary work, which achieved the highest development with St. Boniface, are committed to St. Ludger, a disciple of St. Gregory and St. Alcuin of York.
After the ordination, which was in Cologne in 777, Ludger was dedicated to the evangelization of the pagan region of Friesland, where St. Boniface, had suffered martyrdom.
The methods used by Charlemagne to subdue this region and Christianize were not quite agree with the evangelical spirit. In 776, during the first expedition, the king imposed the baptism of all defeated soldiers, but the revolt of Widukind there was a general apostasy. Ludger had to flee and, after passing through Rome, came to Monte Cassino, where he donned the monastic habit without having yet delivered the votes.
Widukind The rebellion was crushed in 784, and the repression was brutal. The refusal of baptism and the failure of the Lenten fast is punishable by death, but this reign of terror, against which stood the great teacher Alcuin, was odious to Christianity itself, which, however, flourished wonderfully, thanks to the true preachers the Gospel, as St. Ludger, whom the emperor himself went to find Montecasino to return to the motherland and dedicate herself to preach in Friesland. Shortly afterward, to reward him for his zeal, he offered the vacant bishopric of Trier, but the saint refused. But he accepted his missionary work and then took the post of Bishop Bernard in the territory of Saxony.
In AD 795 Ludger built a monastery, around which grew the current city of Münster (Münster in German means monastery). The territory belonged to the ecclesiastical jurisdiction of Cologne, for Ludger accepted only in the 804 to be consecrated bishop of the diocese. Before that date, the indefatigable missionary had no fixed abode.
He built churches and founded schools and new parishes entrusted to the priests that he had formed. He is also due to the founding of the Benedictine monastery of Werden where after he was buried. He died on 26 March 809 and was immediately venerated as a saint. His tomb in Werden remains a pilgrimage destination.

Prayer
Father may the life of your
Bishop Ludger help us Catholics
to love our Blessed Mother Mary
and your son Jesus Christ.
AMEN