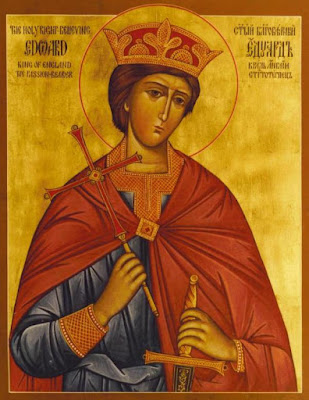 Edward the Martyr was founded in 962, being the eldest son of Edgar the Pacific, King of England, and his first wife Ethelfleda, Ordmaer gentleman's daughter.
On the death of his father (July 8, 975) succeeded to the throne despite the opposition of his stepmother Elfrida, which defended the rights of her son Ethelred the grounds that he was born of a queen anointed, while the mother Edward was never crowned. But thanks to the support of Dunstan, finally manages to be proclaimed king by the Witenagemot.
Its policy is guided, supported by Dunstan, in defending the rights of the Church, diminished in previous reigns. Therefore, many nobles wanted to put in place the young Edward.
On 18 March 978, was hunting with his dogs and some gentlemen in Wareham, Dorset, when he decides to visit his half-brother in Corfe Castle, near Wareham, where he lived with his mother. Separated from the group that accompanied him, arrived alone at the castle. While riding his horse, his stepmother Elfrida offers from the top of the castle a glass of wine, and when he was to achieve it, was stabbed in the back by one of the minions of the queen.
According to legend, immediately after the murder, made his horse dragged the body slipped from the saddle and with one foot in the stirrup and fell at the base of the hill on which Corfe Castle was located. The queen then ordered that the body hidden in a hut nearby. Inside the hut, however, lived a woman blind from birth whom the queen supported by charity. During the night, a wonderful light appeared and filled the whole hut with great fear, she cried: - "Lord, have mercy!" - Suddenly received her sight. She discovered the body of the king.
The church of St. Edward at Corfe Castle now stands on the site of this miracle. At dawn the queen learned of what happened, and scared, he recovered the body, and buries a place according to their rank near Wareham. A year after the crime a pillar of fire appeared on the place where the body was hidden, lighting up the entire area. This was seen by some inhabitants of Wareham, who removed the body of burial given by the Queen. An outbreak originated clear water immediately in that place, being thenceforth known as healing water. Accompanied by a crowd of peasants, the body was taken the church of the Holy Mother of God in Wareham and buried at the east end of the church. This occurred on 13 February 980.
The following year (February 13, 981) the body was moved to the Abbey of Shaftesbury, in Dorset. On the road to be taken the body of the king to the abbey, another miracle occurs: two humpbacks who followed the procession are incredibly healed.
Edward was eventually canonized in English council in the year 1008, chaired by Alpagio, Archbishop of Canterbury later martyred by the Danes in 1012 - and King Ethelred orders the festivities are 3 days: March 18 (day of death), February 13 (day of his miraculous buried in Wareham) and 20 June (on that day in 1001, he was buried and we saw that was uncorrupted). Shaftesbury Abbey was rededicated to the Virgin Mary and Edward. Many miracles kept happening in his tomb for centuries to come, including the cure of leprosy and the return of sight to the blind.
In the sixteenth century during the reign of Henry VIII, when there is mass destruction of monasteries and convents, Edward's body is hidden to save him from the fury of the king. In 1931, the relics were recovered by Mr. Wilson-Claridge during an archaeological dig, his identity was confirmed by Dr. TEA Stowell, osteologist. In 1970, examinations performed on the relics, suggested that the boy had been stabbed in the back while riding his horse and had then been dragged along the ground by the terrified animal with his foot caught in a stirrup. In 1982, Mr-Claridge donated the relics to the Russian Orthodox Church, which put them in a church in Brookwood Cemetery in Woking, Surrey. They organized a brotherhood of monks of the order of Edward to guard there. The church is now called Orthodox Church of Edward the Martyr.

Prayer
Father may the life and death
of your servant Edward help
us lov e the Virgin Mary and
Jesus more each day of our lives.
AMEN