St. John Joseph of the Cross 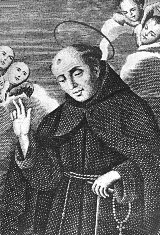 St. John Joseph of the Cross was born about the middle of the seventeenth century in the beautiful island of Ischia, near Naples. From his childhood he was the model of virtue, and in his sixteenth year he entered the Franciscan Order of the Strictest Observance, or Reform of St. Peter of Alcantara. Such was the edification he gave in his Order, that within three years after his profession he was sent to found a monastery in Piedmont. He became a priest out of obedience, and obtained, as it seems, an inspired knowledge of moral theology. With his superiors' permission he built another convent and drew up rules for that community, which were confirmed by the Holy See. He afterward became Master of Novices. Sometimes later he was made provincial of the province of Naples, erected in the beginning of the eightheenth century by Clement XI. He labored hard to establish in Italy that branch of his Order which the sovereign Pontiff had separated from the one in Spain. In his work he suffered much, and became the victim of numerous calumnies. However, the saint succeeded in his labors, endeavoring to instill in the hearts of his subjects, the double spirit of contemplation and penance bequeathed to his Reform by St. Peter of Alcantara. St. John Joseph exemplified the most sublime virtues, especially humility and religious discipline. He also possessed numerous gifts in the supernatural order, such as those of prophesy and miracles. Finally,consumed by labors for the glory of God, he was called to his reward. Stricken with apoplexy, he died an octogenarian in his convent at Naples on March 5, 1734.

PRAYER
Lord you gave us in your memory your servant John Joseph,
may his prayers be full of intercession for our salvation.
AMEN.
Franciscan. Italian Saints March 5 Master of Novices Saint St. John Joseph of the Cross