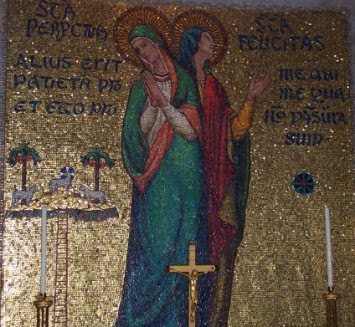 With the lives of so many early martyrs shrouded in legend, we are fortunate to have the record of the courage of Perpetua and Felicity from the hand of Perpetua herself, her teacher Saturus, and others who knew them. This account, known as "The Martyrdom of Perpetua and Felicity," was so popular in the early centuries that it was read during liturgies.
In the year 203, Vibia Perpetua made the decision to become a Christian, although she knew it could mean her death during Septimus' persecution. Her surviving brother (another brother had died when he was seven) followed her leadership and became a catechumen as well.
Her father was frantic with worry and tried to talk her out of her decision. We can easily understand his concern. At 22 years old, this well-educated, high-spirited woman had every reason to want to live -- including a baby son who was still nursing. We know she was married, but since her husband is never mentioned, many historians assume she was a widow.
Perpetua's answer was simple and clear. Pointing to a water jug, she asked her father, "See that pot lying there? Can you call it by any other name than what it is?"
Her father answered, "Of course not." Perpetua responded, "Neither can I call myself by any other name than what I am -- a Christian."
This answer so upset her father that he attacked her. Perpetua reports that after that incident she was glad to be separated from him for a few days -- even though that separation was the result of her arrest and imprisonment.
Perpetua was arrested with four other catechumens including two slaves Felicity and Revocatus, and Saturninus and Secundulus. Their catechist, Saturus, had already been imprisoned before them.
She was baptized before taken to prison. Perpetua was known for her gift of "the Lord's speech" and receiving messages from God. She tells us that at the time of her baptism she was told to pray for nothing but endurance in the face of her trials.
The prison was so crowded with people that the heat was suffocating. There was no light anywhere and Perpetua "had never known such darkness." The soldiers who arrested and guarded them pushed and shoved them without any concern. Perpetua had no trouble admitting she was very afraid, but in the midst of all this horror her most excruciating pain came from being separated from her baby.
The young slave, Felicity was even worse off for Felicity suffered the stifling heat, overcrowding, and rough handling while being eight months pregnant.
Two deacons who ministered to the prisoners paid the guards so that the martyrs would be put in a better part of the prison. There her mother and brother were able to visit Perpetua and bring her baby to her. When she received permission for her baby to stay with her "my prison suddenly became a palace for me." Once more her father came to her, begging her to give in, kissing her hands, and throwing himself at her feet. She told him, "We lie not in our own power but in the power of God."
When she and the others were taken to be examined and sentenced, her father followed, pleading with her and the judge. The judge, out of pity, also tried to get Perpetua to change her mind, but when she stood fast, she was sentenced with the others to be thrown to the wild beasts in the arena. Her father was so furious that he refused to send her baby back to Perpetua. Perpetua considered it a miracle that her breasts did not become inflamed from lack of nursing.
While praying in prison, she suddenly felt "gifted with the Lord's speech" and called out the name of her brother Dinocrates who had died at seven of gangrene of the face, a disease so disfiguring that those who should have comforted him left him alone. Now she saw a vision that he was even more alone, in a dark place, hot and thirsty -- not in the eternal joy she hoped for him. She began to pray for Dinocrates and though she was put in stocks every day, her thoughts were not on her own suffering but on her prayers to help her brother. Finally she had another vision in which she saw Dinocrates healed and clean, drinking from a golden bowl that never emptied. 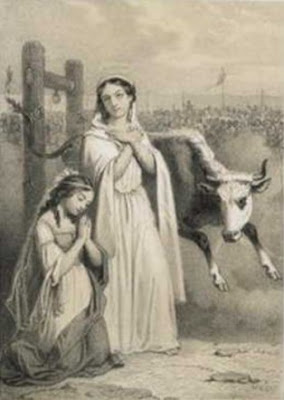 Meanwhile Felicity was also in torment. It was against the law for pregnant women to be executed. To kill a child in the womb was shedding innocent and sacred blood. Felicity was afraid that she would not give birth before the day set for their martyrdom and her companions would go on their journey without her. Her friends also didn't want to leave so "good a comrade" behind.
Two days before the execution, Felicity went into a painful labor. The guards made fun of her, insulting her by saying, "If you think you suffer now, how will stand it when you face the wild beasts?" Felicity answered them calmly, "Now I'm the one who is suffering, but in the arena Another will be in me suffering for me because I will be suffering for him." She gave birth to a healthy girl who was adopted and raised by one of the Christian women of Carthage.
The officers of the prison began to recognize the power of the Christians and the strength and leadership of Perpetua. In some cases this helped the Christians: the warden let them have visitors -- and later became a believer. But in other cases it caused superstitious terror, as when one officer refused to let them get cleaned up on the day they were going to die for fear they'd try some sort of spell. Perpetua immediately spoke up, "We're supposed to die in honor of Ceasar's birthday. Wouldn't it look better for you if we looked better?" The officer blushed with shame at her reproach and started to treat them better.
There was a feast the day before the games so that the crowd could see the martyrs and make fun of them. But the martyrs turned this all around by laughing at the crowd for not being Christians and exhorting them to follow their example.
The four new Christians and their teacher went to the arena (the fifth, Secundulus, had died in prison) with joy and calm. Perpetua in usual high spirits met the eyes of everyone along the way. We are told she walked with "shining steps as the true wife of Christ, the darling of God."
When those at the arena tried to force Perpetua and the rest to dress in robes dedicated to their gods, Perpetua challenged her executioners. "We came to die out of our own free will so we wouldn't lose our freedom to worship our God. We gave you our lives so that we wouldn't have to worship your gods." She and the others were allowed to keep their clothes.
The men were attacked by bears, leopards, and wild boars. The women were stripped to face a rabid heifer. When the crowd, however, saw the two young women, one of whom had obviously just given birth, they were horrified and the women were removed and clothed again. Perpetua and Felicity were thrown back into the arena so roughly that they were bruised and hurt. Perpetua, though confused and distracted, still was thinking of others and went to help Felicity up. The two of them stood side by side as all five martyrs had their throats cut. 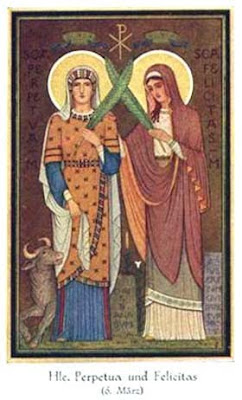 Perpetua's last words were to her brother: "Stand fast in the faith and love one another."


PRAYER
Saints Perpetua and Felicity, watch over all mothers and children who are separated from each other because of war or persecution. Show a special care to mothers who are imprisoned and guide them to follow your example of faith and courage.
AMEN.
and companions July 10. March 7 martyrs mother and daughter persecution Ss. Perpetua and Felicity St. Felicity St. Perpetua