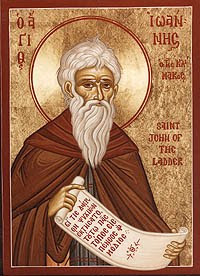 John's nickname comes from the famous treatise on asceticism written by John and entrusted to the abbot of Raithu, The Ladder of Paradise (Greek climax, which means stairs). His biographer, the monk Daniel Raithu Monastery, southwest Sinai, writes that John was born in Palestine and the age of six left the hometown to retire to a monastery in Sinai. There he received the monastic tonsure at four years of income and lived 19 years in community under the guidance of a holy old man, named Martyrdom.
When the master died, John retired to a solitary cell on Mount Sinai, a few miles from the monastery, where he was down on Saturday and Sunday to participate in religious ceremonies with the other brothers. In the cell there was only a wooden cross, a table and a bench that served as chair and bed. Their only wealth were the books of Holy Scripture and the writings of the Fathers of the Church, including Pastoralis Regula of St. Gregory the Great, translated into Greek by a patriarch of Antioch about AD 600.
The allusion to this work is not casual. Clearly, the Scala Paradisi depends on Pastoralis Regula, although for a long time this was inexplicable because scholars believe that St. John Climacus had lived in the
John Climacus, Saint
Century V, after new documents were allowed to establish the date of his death in 649, thus clarifying the influence of St. Gregory the Great on the doctrine of ascetic hermit Sinai, especially in the epilogue, entitled "Liber ad Pastorem . In the epilogue are summarized the duties of the abbots and of all who govern a religious community. John Climacus wrote that synthesis of the spiritual teaching in the years following his experience of a hermit, when he was taken from his beloved solitude for him to the front of the monastery of Mount Sinai.
The holy hermit was sixty years old when, in obedience, wrote the result of his prolonged meditations on the practice of Christian virtues. Thus was born one of the more ascetic theological treatises read and that since its first publication has been widespread. His Scala has three steps, namely, thirty chapters corresponding to the years of the life of Jesus, and develops in three parts the road or soul's progress towards perfection, based on the renunciation of the world to come, by combating vices and the acquisition of virtues, to the top of inner perfection, which is union with God through charity.

Prayer
Father may your abbot John
help us so we can be
better Catholics through
this day and all the other
days.
AMEN