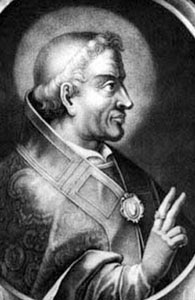 His date of birth is uncertain, died April 22, 536.
Gordianus was the son of a Roman priest who had been discharged during the riots in the days of Pope Symmachus.
His first official act was to burn in the presence of the assembly of the clergy, the anathema which Boniface II had spoken out against Dioscurus, his last rival ordered to be preserved in the Roman archives.
He confirmed the decrees of the council held at Carthage, after the liberation of Africa from the yoke of vandalism, according to which converts from Arianism were declared ineligible to Holy Orders and those already ordained were merely admitted to lay communion.
He accepted an appeal from Contumeliosus, Bishop of Riez, a council in Marseille who had condemned for immorality, and ordered St. Caesarius of Arles to grant the defendant a new trial before papal delegates. Meanwhile Belisarius after the easy conquest of Sicily, was preparing for an invasion of Italy.
The Gothic king, Theodehad as a last resort, begged the old pontiff to proceed to Constantinople and bring their influence to deal with the Emperor Justinian.
To defray the costs of the embassy, Agapito was forced to pledge the sacred vessels of the Church of Rome.
He has engaged in midwinter with five bishops and an impressive entourage. In February 536, appeared in the capital of the East and was received with full honors befitting the head of the Catholic Church.
As he had no doubt expected, the apparent object of his visit was doomed to failure. Justinian could not be diverted from his resolution to restore the rights of the empire in Italy. But from the ecclesiastical point of view, the Pope's visit to Constantinople was a triumph scarcely less memorable than the campaigns of Belisarius.
The occupant then Byzantium Headquarters was some Anthimus, who without the authority of the canons had left his episcopal see of Trebizond to join the crypto-Monophysites, in conjunction with the Empress Theodora intrigued to undermine the authority of the Council of Chalcedon.
Against the protests of the orthodox, Empress Anthimus finally seated in the patriarchal chair.
No sooner had the Pope arrived, most prominent of the clergy entered charges against the new patriarch, as an outsider and a heretic. Agapito ordered a written profession of faith and return to his home abandoned, upon his refusal, declined to have any relationship with him.
This angered the Emperor, who had been deceived by his wife as to the orthodoxy of his favorite, to the point of threatening the Pope with the banishment. Agapito replied with spirit: "With eager longing come to look to the Christian Emperor Justinian. Instead find a Diocletian, whose threats, however, does not terrify me." This bold language made Justinian pause, being finally convinced that Anthimus was unsound in faith, made no objection to the Pope in bringing the fullness of his powers to lay down and stop the intruder, and for the first time in the Church history, personally consecrating his legally elected successor, Mennas.
This memorable exercise of papal prerogative not soon forgotten by the Orientals, who, along with Latinos, venerate him as a saint.
To clear himself of any suspicion of abetting heresy, Justinian gave the Pope a written confession of faith, which the latter accepted with the judicious clause, "though he could not admit to a layman the right to teach religion, noted with pleasure that the desire of the Emperor was in perfect accord with the decisions of the Fathers.
Agapito Shortly after he fell ill and died, after a glorious reign of ten months. His remains were placed in a coffin and sent to Rome, being held in San Pedro.
His memory is kept on 20 September, the day of his deposition. The Greeks commemorate him on 22 April, the day of his death.

Prayer
Father may the life and death
of your servant Agapetus I help us
be better Catholics.
AMEN