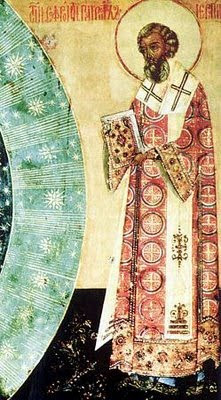 Patriarch St. Sophronius of Jerusalem was called the Sophist because of his knowledge of Greek. He was an ardent opponent of monothelitism. Many of his writings, including the Florilegium and the life of St. John the Almsgiver, are no longer extant. He wrote an encomium on John of Cyrus and composed 23 anacreontic odes on the feasts of the church. His Christmas homily of 634 suggests that the Saracens held Bethlehem at that time. (Historians had dated the event later). The Orthodox remember St. Sophronius chiefly as the author of the life of St. Mary of Egypt. Sophronius was born in Damascus around 560. He and his friend John Moschus became ascetics together while they were in their late teens or early twenties. Some say they lived near the Jordan; some say they lived in Egypt. In 605, Sophronius fled to Alexandria in the wake of Persian invaders, and when the Persians invaded Alexandria in 616, he fled to Rome. In 619, he returned to Palestine and lived in the Theodosius monastery in Jerusalem. When Patriarch Cyrus of Alexandria began to preach monothelitism, St. Sophronius travelled to that city to argue against him; in 633, when Patriarch Sergius of Constantinople began to preach monothelitism, St. Sophronius travelled to that city to argue against him. Neither visit was successful. After Sophronius was elected Patriarch of Jerusalem in 634, he wrote the Synodical Letter to teach the two wills of Christ. In 637, the Muslims captured Jerusalem; St. Sophronius died a year later of grief at the fall of his city.
March 11. Patriarch of Jerusalem St. Sophronius of Jerusalem