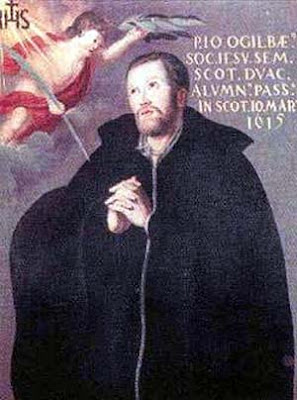 Father John Ogilvie came from a noble family. He was born in Drum-na-Kelth (Scotland) in 1579 and was educated in Calvinism. At thirteen, his father sent him to France, Italy and Germany to give a more complete education.
They had their first contacts with Catholicism as religious disputes were very popular in those places. He converted to Catholicism and was received into the Church of Scotland College of Louvain in 1596, seventeen. Embracing the Catholic faith meant for John to break with the family and the loss of support that she received, a waiver to a brilliant career and the pursuit reserved for traitors. On November 15, 1599 entered the Jesuit novitiate in Brno, studied philosophy at Gratz, was a professor at the Jesuit college in Vienna and eventually studied theology at Olmütz, being ordained a priest in Paris in 1610. After three years of pastoral life in the city of Rouen got permission to go to England.
He arrived in Scotland, under the guidance of an ex, dedicated to horse-trading, with the pseudonym of John Watson and pretending horse dealer, with laws against priests who entered Britain were very severe. He landed in November 1613 in the port of Leith.
Concentrated their activity in Renfrewshire, Edinburgh and Glasgow, facing a thousand dangers. The Catholic community of Father Ogilvie began to grow underground and are
St. John Ogilvie
made famous by the insistence with which he preached fervently in Catholic life, with great dangers, visiting Catholics: Sir James MacDonald recalled with satisfaction the views of the father in prison Ogilvie, who was betrayed and arrested in Glasgow on 14 October 1614.
He was subjected to prolonged torture and interrogation to denounce Catholics, coming to deprive him of sleep for eight consecutive days. Being asked whether the pope's jurisdiction extended to the king's authority in spiritual matters, said he constantly declaring his readiness to die to defend it. In all trials that lasted for months, and in Glasgow and Edinburgh, the father did not flinch because he could not, or want to betray God. The news of his heroism spread throughout Scotland, so that the pursuers, especially the Anglican bishop would have given anything to renounce their faith and accept the supremacy of the king. Although the guards began to treat more severely, Father Ogilvie could write in Latin an account of his imprisonment, when he finished, he managed to slip under the door to some Catholics who had entered the jail. In order stated only will save my life if I can save without being forced to lose God. Unable to keep both, either voluntarily lose less, save the maximum. He was sentenced to die as a traitor. The executioners offered him freedom if he repudiated the faith. Was hanged on 10 March 1615, in Glasgow.
He was beatified in 1929 by Pope Pius XI and canonized in 1976 by Pope Paul VI.

Prayer
Father may the life of
your religious martyr
John help us love you
more each and every day of
our life so we may be better
Catholics.
AMEN