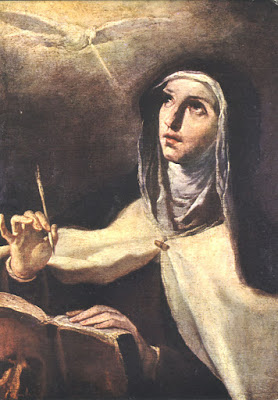 Born in 1515 in Avila, Teresa de Cepeda y Ahumada began at forty years the task of reforming the Carmelite Order by its primitive rule, guided by God through mystical conferences, and with the help of San Juan de la Cruz (who in turn amended the male branch of the Order, the Discalced Carmelites separated from the shoes). It was a mission almost unbelievable for a frail woman like yours: from the monastery of San Jose, outside the walls of Avila, first reformed Carmelite convent for her, left with the burden of the treasures of His Castle Inside, in all directions of Spain and held numerous foundations, raising too many grievances, to the extent that temporarily left him permission to draw other reforms and to establish new cases.

Mystical teacher and director of consciences, was to epistolary contacts with King Philip II of Spain and the most illustrious figures of his time, but as a practical woman took care of things monastery minimum and never neglected the economic side, because as she herself said: "Teresa, without the grace of God, is a poor woman, with the grace of God, a force, with the grace of God and a lot of money, power." At the request of the confessor, Teresa wrote the story of his life, a book of confessions from the most sincere and impressive. In the introduction makes this observation: "I would have liked, and they ordered me to write my way of prayer and the graces that the Lord gave me, I would have also allowed detailed and clearly tell my great sins. It is the story of a struggling soul up passionately, without success, at first. " Thus, from the human standpoint, Teresa is a figure close, which is presented as a creature of flesh and blood, the opposite of idealistic representation angelic Bernini.

From childhood he had shown a exuberant temperament (at age seven he ran away from home to seek martyrdom in Africa), and a contrasting trend to the mystical life and practical activities, organizational. Twice he fell seriously ill. During the illness began to live some deep mystical experiences that transformed his inner life, giving the perception of the presence of God and the experience of mystical phenomena that she later described in his books: "The road to perfection", "Thoughts the love of God "and" The Interior Castle. "