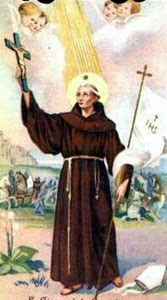 Born in Capistrano, diocese of Sulmona, Italy, in 1385.
The son of a French or German gentleman who died when John was young.
Carefully studied at the University of Perugia (near Assisi).
He was a lawyer and judge. In 1412 he was appointed governor of Perugia by Landislaus king of Naples, who had control of that city. He fought against corruption and bribery.

When war broke out between Perugia and Malatesta in 1416, John tries to make peace, but instead was taken prisoner of war. In prison he decided to give himself entirely to God. Had a dream that San Francisco saw that he was called to enter the Franciscan order. John had married just before being taken prisoner, but the marriage never ate and was annulled.

He entered the Franciscan order in Perugia on October 4, 1416. He was 30 years, so the novice tested it by giving the most humble offices.

He was a disciple of St. Bernardino of Siena who taught him theology. He distinguished himself as a preacher while being a deacon. Ordained at age 33. For 40 years he was an itinerant preacher in Italy and other countries. Once in Brescia (Italy) preached to a crowd of 126,000 people who had come from neighboring provinces. For his radical call to conversion and simplicity, people connected to San Juan Bautista. They brought the stuff of superstition and the occult and burned in public bonfires. He was renowned for his gift of healing and bring him to the sick so that they make the sign of the cross. As San Bernardino, spread devotion to the name of Jesus, so both, along with other Franciscans, were accused of heresy. The group successfully defended.

Many young people followed him to the religious life. Established Franciscan communities. He wrote extensively, mainly against the heresies of his day. Many of his sermons are preserved.

Franciscan community twice elected him vicar general. In a visit to France met St. Colette, reformer of the Order of St. Clare, with whom he sympathized.

John had a great gift for diplomacy. He was wise and prudent measure their words knowing that they serve the will of God. Four Popes (Martin V, Eugene IV, Nicholas V and Calixtus III) employed him as ambassador to many very delicate diplomatic missions with very good results. Three times they offered him appointed bishop of major cities but chose to remain a poor preacher.

He was papal nuncio in Austria where he preached extensively and fought the heresy of the Hussites. He also preached with great fruit in Poland, invited by Casimir IV.

In 1451 the Sultan Mohammed II launched a campaign to achieve the conquest of Europe. Conquered Constantinople in 1453 and then prepared to invade Hungary. In 1454 Servia fell into his hands. News from Serbia were horrible, who refused to renounce Christ were tortured. All that was Christian was destroyed or confiscated.

In 1454 Juan Capistrano participated in the diet of Frankfort and started to prepare the defense of Hungary. Went to Hungary, and preached a crusade in defense of Christianity. At the age of 70 years the Pope Callistus II commissioned him to direct. In Szeged joined the army of peasants who had joined the army of Hunyady and they went to Belgrade. It was said that the barracks seemed more religious houses that military camps because they prayed and preached the virtue. Mass is celebrated daily. A Juan Capistrano you had a great respect.

Battle of Belgrade, 1456, save Europe from the Muslims.

The Muslims attacked Belgrade had 200 guns, 50,000 cavalry and a large fleet that entered the river Danube. Given the superiority of enemy forces, the Christians thought retire. But Juan Capistrano intervened Hunyady convincing to attack the Turkish fleet despite being much larger. By the time the defenders of the city would withdraw giving up, being encouraged John in his hands a flag with the cross and shouting incessantly: "Jesus, Jesus, Jesus." Through all the battalions shouting enthusiastically: "Brave Believers, all to defend our holy religion." John never used the weapons of this world but the prayer, penance and preaching.

While fighting in Belgrade, the Pope asked to pray the Angelus for the win. The Muslims were defeated and had to withdraw from the region. This won the battle of Belgrade on 21-22 July 1456.

St. John of Capistrano had offered his life to God to save Christianity. God accepted his offer and soon died with Hunyady victims of typhus. The bodies of those killed in battle led to a typhus epidemic also spread to the saint who was already weak and elderly. He died in Villach, Hungary, a few months later, on 23 October.

In America his name is famous for the Franciscan mission in California that bears his name.