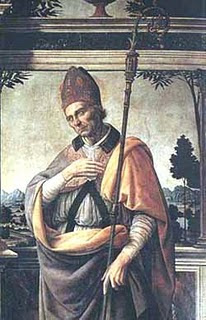 Donatus was born in Ireland, of a noble family. He was educated at Inis Cealtra on Lough Derg. About 816 he visited the tombs of the Apostles in Rome with his friend, Andrew the Scot. According to Christian tradition, on his journey northwards he was led by Divine Providence to the cathedral of Fiesole, which he entered at the moment when the people were grouped around their altars praying for a bishop to deliver them from temporal and spiritual evils. Raised by popular acclaim to the See of Fiesole, Donatus instituted a revival of piety and learning in the church over which he was placed. Donatus made Andrew his deacon.

He himself did not disdain to teach "the art of metrical composition". The "Life" is interspersed with short poems written by the saintly bishop. The best known of these is the twelve-line poem in which he describes the beauty and fertility of his native land, and the prowess and piety of its inhabitants. Donatus also composed an epitaph in which he alludes to his birth in Ireland, his years in the service of the princes of Italy (Lothair and Louis), his episcopate at Fiesole, and his activity as a teacher of grammar and poetry.
Bishop of Ireland Irish Bishops Irish Saints October 22. St. Donatus of Fiesole