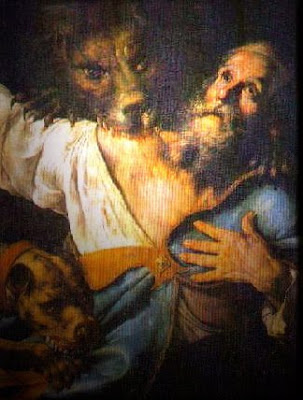 The doors open slowly. Bodies like ghosts walk in the sand. Squinting eyes that used to live in the shadows of the dungeon, suddenly receive sunlight. The roar of the crowd ends up waking. Move aimlessly, some holding hands, others alone and sad eyes reflecting fear and bewilderment. The trumpets sound. String sounds are heard everywhere and the center of the earth bloodthirsty beasts emerging: Panthers, African lions, hyenas. The party has begun! Circus Maximus is offered to the Romans the spectacle of death to hundreds, perhaps thousands of Christians, witnesses of their faith in Christ. Are the times of Emperor Trajan, back in the years 98 to 117 of our era when being a Christian meant to give one's life.

Puddles of blood flood the place, mangled and dismembered members everywhere, a plaintive cry and suffering of someone who has survived. The night has come and blanket the pines and cypresses of the Roman hills. And among the moans and groans are heard vibrating words of an old, dead and mangled by a lion. These are words that are engraved in the hearts of the faithful, in the distant past Antioch. Ignacio is the second successor of Peter as bishop of Antioch. "Please, brothers, I do not deny yourselves of this life, do not wish to die ... let light can contemplate, then I am truly a man. Let me imitate the passion of my God. "

Ignatius of Antioch knew that real life was that which awaited him after death, where he could contemplate face to face with the face of Christ, "let the light to contemplate." He knew that to get to watch that light was necessary to witness the light in this world no matter the trials and suffering as necessary. Trials and suffering that brought dignity as soldiers did not have mercy on him during his long and arduous journey from Antioch to Rome. Trial and suffering that crystallized with the shedding of his blood and he saw as a necessity: "I am wheat of Christ, I will be crushed by the teeth of beasts to become pure and holy bread."

A martyr is nothing far from us that today we are called to be martyrs bloodless Catholics, ie martyrs shed their blood not physical, but the blood of fidelity to the commandments of the Church. It is the martyrdom of everyday life, of which as Ignacio proclaim their everyday example is "not right to do what God's law qualifies as evil to draw some good." Of those who love both Christ and the Church "who respect his commandments, even in the most serious and prefer his own death rather than betray those commandments." (Cf. Veritatis Splendor, n. 90-91)

They are the martyrs who quietly know they are Catholic to the end: the wife to the "horror" to inform the husband that she was pregnant again in adverse economic circumstances, knowing how to be brave and consistent with the reality of Catholic and never think As abortion as the "easier and safer" to avoid problems with her husband. Young people who have an impeccable life of chastity and purity, keeping their bodies clean until marriage, "suffering" the martyrdom of overwhelming pressure from the media and invite friends to sex as a fun pastime, "safe, with no serious consequences. " Businessmen and workers who face the possibility of a business "not so clean" or "make a small trap pattern" prefer to continue with pride and head up the commandment which many old and outdated, "You shall not kill ". And so we have an example, an endless stream of martyrs of the XXI century are presented every day as St. Ignatius of Antioch, with the new beasts of the Circus Maximus and also hear every day, the words he heard the last Ignatius lion's roar, "Come unto me, blessed of my Father ... today will be with me in Paradise. "