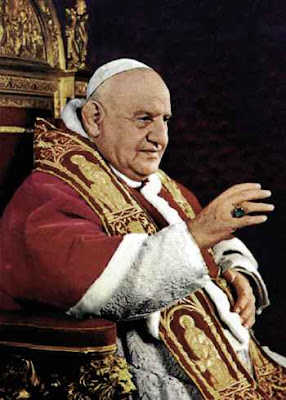 Born into a large peasant family, with deep Christian roots. Soon entered the seminary, where he professed the Rule of the Secular Franciscan Order. Ordained priest, he worked in his diocese until, in 1921, he entered the service of the Holy See. In 1958 he was elected Pope, and their human and Christian qualities earned him the name "good pope." John Paul II beatified him in 2000 and established that his feast is celebrated on 11 October.

Born on November 25, 1881 in Sotto il Monte, diocese and province of Bergamo (Italy). That same day he was baptized with the name of Angelo Giuseppe. It was the fourth of thirteen children. His family lived on the farm work. Family life Roncalli was patriarchal. Zaveri Her uncle, godfather, he attributed his first and fundamental religious training. The religious climate of the family and parish life earnest, were the first and fundamental school of Christian life, which marked the spiritual physiognomy of Angelo Roncalli.

Received confirmation and first communion in 1889 and in 1892 entered the seminary in Bergamo, where he studied until the second year of theology. There he began writing his spiritual notes, would write to the end of their days and have been collected in the Journal of the soul. " On March 1, 1896 the spiritual director of the seminary of Bergamo admitted in the Secular Franciscan Order, whose professed Rule May 23, 1897.

From 1901 to 1905 he was a student of the Pontifical Roman Seminary, thanks to a grant from the diocese of Bergamo. At this time was also a year of military service. He was ordained on August 10, 1904, in Rome. In 1905 he was appointed secretary of the new bishop of Bergamo, Giacomo Maria Bishop Radini Tedeschi. He held this post until 1914, accompanying the bishop in the pastoral visits and working on multiple initiatives apostolic synod, the diocesan newspaper editorial, pilgrimages, social work. At the same time was a professor of history, patristic, and apologetic in the seminar, assistant women's Catholic Action, a partner in the Catholic newspaper of Bergamo and much sought after speaker for his eloquence elegant, profound and effective.

In those years, also delved into the study of three pastors: St Charles Borromeo (who published the Proceedings of the apostolic visit made to the diocese of Bergamo in 1575), St. Francis de Sales and then Blessed Gregory Barbarigo. After the death of Bishop Radini Tedeschi in 1914, Don Angelo continued his priestly ministry dedicated to teaching at the seminary and the apostolate, especially among members of Catholic associations.

In 1915, when Italy entered the war, was called as a medical sergeant and appointed military chaplain wounded soldiers returning from the front. At the end of the war gave the "House of student" and worked in pastoral care of students. In 1919 he was appointed spiritual director of the seminar.

In 1921 started the second half of the life of Don Angelo Roncalli, dedicated to serving the Holy See. Called to Rome by Benedict XV for Italy as president of the Central Council of the Pontifical Society for the Propagation of the Faith, traveled many dioceses of Italy organized missions circles. In 1925 Pius XI named him Apostolic Visitor to Bulgaria and was elevated to the episcopacy and assigned the titular see of Areopoli. His episcopal motto, a program that accompanied him throughout life, was "Obedience and Peace".

After his episcopal ordination, which took place on March 19, 1925 in Rome, began his ministry in Bulgaria, where he remained until 1935. Visited Catholic communities and cultivated friendly relations with other Christian communities. Acted with great concern and charity, relieving the suffering caused by the earthquake of 1928. Endured in silence the misunderstandings and difficulties of a ministry marked by pastoral tactics of small steps. Strengthened their trust in Jesus crucified and its delivery to him.

In 1935 he was appointed apostolic delegate to Turkey and Greece. It was a vast field. The Catholic Church had an active presence in many areas of the young republic, which was being renovated and organizing. Archbishop Roncalli worked intensely to serve Catholics and noted for its dialogue and friendly spirit with the Orthodox and Muslims. At the outbreak of World War II was in Greece that was devastated by the fighting. He tried to give news about prisoners of war and saved many Jews with the "transit visa" of the apostolic delegation. In December 1944 Pius XII appointed him Apostolic Nuncio in Paris.

During the last months of World War, and peace restored, helped prisoners of war and worked in the normalization of ecclesiastical life in France. He visited the great shrines in France and participated in festivals and religious events more meaningful. He was an attentive observer, cautious and confident in the new pastoral initiatives of bishops and clergy of France. Always distinguished by his search for Gospel simplicity, even the most intricate diplomatic affairs. He tried to act as a priest in all situations. Driven by a sincere piety, he spent long time each day to prayer and meditation.

In 1953 he was made a cardinal and sent to Venice as Patriarch. It was a wise and resolute minister, following the example of saints who had always revered like St. Lorenzo Giustiniani, first Patriarch of Venice.

After the death of Pius XII, was elected Pope on October 28, 1958, and took the name John XXIII. His pontificate, which lasted less than five years, presented the world as a true image of the Good Shepherd. Gentle and friendly, enterprising and brave, simple, friendly, Christian practice works of mercy and spiritual body, visiting the imprisoned and the sick, welcoming people of all nations and beliefs, and cultivating an exquisite sense of paternity for all. His teaching, especially his encyclical "Pacem in Terris" and "Mater et Magistra", was greatly appreciated.

Convoked the Roman Synod, established a Commission for the revision of the Code of Canon Law and convened the Second Vatican Council. He visited many parishes in his diocese of Rome, especially those of the new neighborhoods. People saw in him a reflection of the goodness of God and called him "the Pope of goodness." I held a deep spirit of prayer. Your initiator of a great renewal in the Church, he radiated peace of one who trusts in the Lord always. He died the evening of June 3, 1963.

John Paul II beatified him on September 3, 2000, and established that his feast is celebrated on October 11, remembering well that John XXIII opened the Second Vatican Council solemnly on 11 October 1962. This a Picture of the incorrupt body of Pope John XXIII. 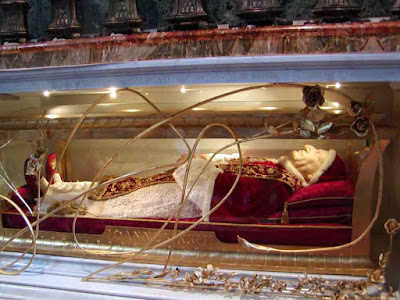