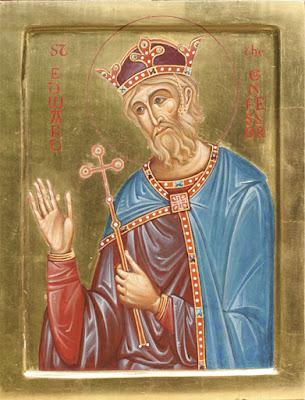 Edward, St. Edward's grandson called the Martyr, was born in 1004 in Islip, near Oxford. His father was King Ethelred II, called the discouraged. While still a child, had to take the path of exile and lived from 1014 to 1041 in Normandy with relatives of his mother.
It is said that vowed to go on pilgrimage to Rome if the Divine Providence led him back to his homeland. When this happened, Eduardo wanted to fulfill faithfully the vote, but the pope dispensed. The money you would spend on the trip gave to the poor and part of it was devoted to the restoration of the monastery in West London (West Minster, Westminster today.)

Despite the political failures of their government, Edward King of England from 1043 to 1066, left a vivid memory in his hometown. The reasons for this devotion, which continued through the centuries, are to be found not only in some wise administrative measures such as the abolition of a heavy military duty that afflicted the entire nation but especially in its mild, generous (never a contempt or a word of reproach or a sign of anger or even the most humble subjects) and in his private life.
A year after his coronation was married to Edith Godwin highly cultured daughter of his most terrible enemy of Baron Godwin of Wessex.

It had been a clever political move of his father, because he hoped that Eduardo, whom they called "the Confessor", entrusted with the administration of the government to engage more freely to prayer and meditation
The plan, too subtle, only succeeded in part because at 1051 the Baron was banished and the queen was imprisoned in a convent. But it was only a parenthesis, because the agreement between Edward and the queen was very deep, to the point that, according to biographers, the two had made a vow of virginity agreement.
The solemn opening of the famous choir of the Monastery of Westminster, which he had funded, was held on December 28, 1065. But the king was seriously ill.

He died on January 5, 1066 and was buried in the abbey church recently restored. Soon there were many pilgrimages to his grave. In recognition of 1102 his body was found incorrupt and 17 February L161 Pope Alexander III as included in the list of saints. The day of his feast coincides with the date on which Thomas Bechet solemnly moved his relics to the same church choir.

Today, at a distance of nearly ten centuries, England still calls his Crown of St. Edward. "

It was not easy right? Now I remember that wonderful Castilian proverb that says: "Every day is good to praise God."