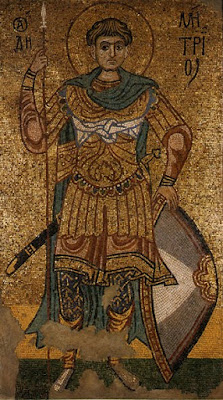 His parents, who practiced Christianity in secret, he was baptized and taught religion.

His father, a Roman proconsul, was killed when Demetrio was an adult.

Emperor Maximian (IV) appointed governor and military Demetrio all Thessaloniki. The main function of San Demetrio was to defend the province of the enemy, forcing the Emperor to exterminate the Christians also.

Demetrius instead of this began to eliminate pagan customs and converted pagans to Christianity.

Soon reached the ears of the emperor who was the deputy Demetrius Christian and knowing Demetrius, was prepared for death, divided his possessions to the poor, making a life of fasting and penance.

The Emperor detained the deputy and began to be distracted by scenes of gladiators and circuses, where he had to sand the Christians.

The gladiator known Liac easily dominated the submissive Christians in the struggle and to the jubilant crowd threw them on the spears of the warriors.

The young Christian St. Nestor, St. Demetrius visited the St. Demetrius captivity and blessed him for a melee with Liac. Strengthened by God, St. Nestor beat the proud gladiator.

As Maximian knew why that Nestor had won, he ordered that St. Demetrius was pierced with the lances of his guards, and St. Nestor was beheaded with his own sword.

The body of the martyr St. Demetrius was cast as food for the animals, but the people buried him in secret.

During the reign of Emperor Constantine the Great (324-337) at the tomb of the martyr St. Demetrios founded a church and 100 years were found in their holy relics.

The life of St. Demetrius says freeing prisoners from the hands of the enemy and helped them reach Soluna.