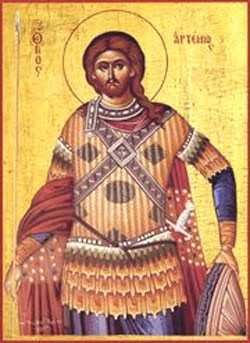 Artemius was an Arian Christian, as Emperor Constantius II was. Constantius ordered Artemius to go in the lands beyond the Danube and to bring back to Constantinople the relics of Andrew the Apostle, Luke the Evangelist and Saint Timothy. Artemius accomplished his task and was rewarded with the appointment to the rank of dux Aegypti.

One year later Constantius was succeeded by his cousin Julian, who was a Pagan. The people of Alexandria accused Artemius of several atrocities, and Julian condemned him to death. Artemius was beheaded in 363 in the city of Antioch, where he had been recalled by Emperor Julian the Apostate for maladministration of his province. The charges stemmed from his persecution of pagans in Alexandria, and his use of troops in the seizure and despoliation of the Temple of Serapis instigated by George of Cappadocia. After his death, the people of Alexandria killed George.
Egypt martyr October 20. roman saints Roman Soldier St. Artemius