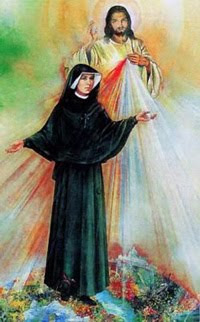 Sister Faustina was born in 1905 in the village of Glogowiec , near Lodz, as the third of ten children in the Kowalski family . From childhood she was distinguished by the love of prayer , hard work , obedience and sensitivity to human poverty. Her schooling lasted only three years. At the age of 16 left home to work as a maid in the homes of wealthy families. At 20 he entered the Congregation of the Sisters of Mother of God of Mercy , where as Sister Maria Faustina lived 13 years performing the duties of cook, gardener and porter. His life was apparently insignificant, monotonous and dull , was characterized by the extraordinary depth of his union with God. From her childhood she wanted to be a great saint and , therefore, walked towards this goal, working together with Jesus in the work of saving lost souls, to offer as a sacrifice for sinners. The years of monastic life were marked , then, by the stigma of suffering and the extraordinary mystical graces .

The mission of Sister Faustina consists in 3 tasks :

-
Zoom in and proclaim to the world the truth revealed in Holy Scripture about the merciful love of God to each person.

-
The third task is to inspire an apostolic movement of Divine Mercy who proclaim and achieve God's mercy for the world and aspire to Christian perfection, following the footsteps of Sister Maria Faustina. This road is the attitude of childlike trust toward God which expresses itself in fulfilling His will and the attitude of mercy towards others . Today, this movement within the Church involves millions of people around the world: religious congregations , lay institutes, religious , brotherhoods , associations, various communities of apostles of Divine Mercy and individual people who are committed to achieving the tasks that Lord Jesus communicated to them through St. Mary Faustina.

Sister Mary Faustina was his mission in the newspaper that wrote by command of the Lord Jesus and her confessors . faithfully recorded it all that Jesus asked , describing the encounters between her soul and Him Secretary of My most profound mystery < said the Lord Jesus to Sister Faustina < Your mission is to write all that I make known on my mercy for the benefit of those who read these writings, their souls will find comfort and have the courage to approach Me (Diary 1693). This work is so special about the mystery of God's mercy . It attracts not only the common people but also scholars who look upon it as an additional research. The Diary has been translated into many languages, among others, English , German , Italian , Spanish , French , Portuguese , Arabic , Russian , Hungarian , Czech and Slovak.

On April 18, 1993 Pope John Paul II beatified Sister Faustina Kowalska our in St. Peter's Basilica in Rome. It was the first Easter Sunday, in which, according to the express request of Jesus to Sister Faustina , was held the Feast of Mercy . And precisely John Paul II beatified , who were still archbishop of Krakow, carried out the process as a step processes Romans.


PRAYER TO MEET YOU

Oh Jesus, you made Blessed Faustina a great devotee of your infinite mercy,

Saint Faustina , pray for us.