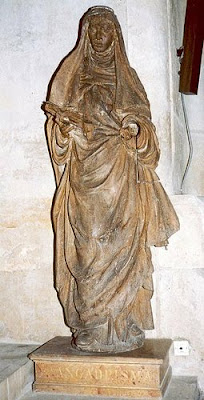 Angadrisma was a seventh century abbess venerated as a saint. A cousin to Bishop Saint Lambert of Lyons, she was educated at Thérouanne by Lambert and Saint Audomare.

Although she wished to become a nun, she was promised in an arranged marriage to Saint Ansbert of Chaussy. Tradition states that Angadrisma, wishing for a way out, prayed fervently and was stricken with leprosy. She was cured when she was allowed to become a nun and received the veil from Saint Ouen, archbishop of Rouen.