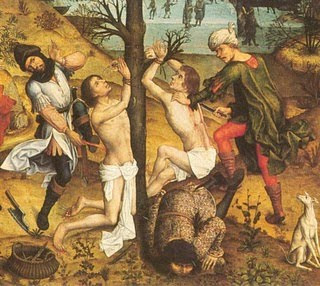 The soul that wants to give himself entirely to God, not seeking anything for himself but to think, speak and act with the goal of God. And this is no bigotry, but a strong and intense drive to do enough for others.

Today's youth, who died in 285, are far from our history of the third millennium.

However, their works and their names are etched in the pages of the history of the Church forever.

Who were they?, What did?

They settled in Rome and learned the trade of shoemakers. And any work can make an announcement or proclamation of the Gospel and the riches it brings to the human soul.

This service is finalized to make shoes for the poor. These, of course, not charged them anything.

The rich, who knew the good job they did and the quality of the shoe, it charged them.

The beauty of these two believers is engaging the time of sale or free to speak enthusiastically about Jesus Christ.

And the most natural thing in the world.
Should live what they said because people heard gladly.

Shakespeare's praises in his play "Henry V" and "Julius Caesar."

As everyone agrees on is that died as martyrs.