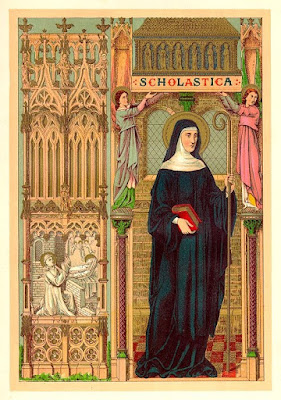 The only historical source on the life of St. Scholastica, sister of St. Benedict, is Chapters 33 and 34 of the second book of the Dialogues of St. Gregory the Great. The news, which added legendary enrich some simple and intense image of the saint. But Gregory was not interested in presenting a story full biography of St. Scholastica, but completing the internal profile of the father of Western monasticism.
It seems that the birth year of the two holy matches: 480. Therefore, Benedict and Scholastica were probably twins, and if it were anagrafica, yes they were spiritually, since their lives were parallel to the death, in 547, 40 days away.
Scholastica was born in Nursia very young and devoted himself to God, then followed his brother to San Benito Subiaco and Monte Cassino. In Piumarola, at the foot of the mountain, he established his monastery, as if humbly wanted to stop at the foot of the mountain, whose summit's brother had set his room. But despite being so close in place and affection, Benedict went down to visit her sister only once a year. St. Scholastica is understandable that I would stop for a little more with his brother, but St. Benedict was very rigorous in complying with the rule which he himself had imposed.She was a Benedictine Nun.
In the last symposium, held perhaps the first Thursday of Lent of 547, God showed that he liked the gesture of affectionate love that strict compliance with the rule. Indeed, Scholastic has asked me to stay with her brother, as St. Gregory relates, "so that all night until the next day they would speak of the joy of the heavenly life."
Scholastica,
Faced with severe criticism of Benedict, Scholastica clasped her hands and remained in prayer. "It could more before God because he loved most," says St. Gregory the Great.
And indeed, few moments later it seemed that opened the cataracts of heaven, the rain and thunder forced to abandon San Benito return to the monastery, but he blamed the sister replied candidly: "Well, I'll I asked and I wanted to hear, and he asked the Lord if he heard me, go if you can, and returns to the monastery. "
At the site of the miracle was built the "church of the colloquium" and remember that episode at St. Scholastica is invoked against lightning and rain for. After three days of that wonderful symposium, San Benito, during prayer, he saw the soul flying to heaven Scholastica as a dove, and he followed 40 days to live forever "heavenly joy."

Prayer
Father may the life of
St. Scholastica help us
make sacrifices so we
cane reach the glory
of your kingdom where
we will sing your glory
We ask this through Christ
our Lord.
AMEN