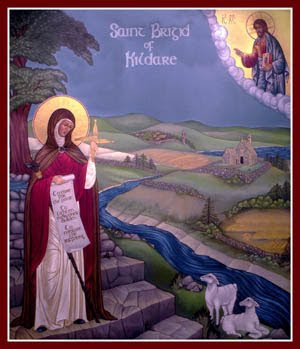 Brigid was probably born at Faughart near Dundalk, Louth, Ireland. Her parents were baptized by St. Patrick, with whom she developed a close friendship. According to legend, her father was Dubhthach, an Irish chieftain of Lienster, and her mother, Brocca, was a slave at his court. Even as a young girl she evinced an interest for a religious life and took the veil in her youth from St. Macaille at Croghan and probably was professed by St. Mel of Armagh, who is believed to have conferred abbatial authority on her. She settled with seven of her virgins at the foot of Croghan Hill for a time and about the year 468, followed Mel to Meath. About the year 470 she founded a double monastery at Kildare and was Abbess of the convent, the first in Ireland. The foundation developed into a center of learning and spirituality, and around it grew up the Cathedral city of Kildare. She founded a school of art at Kildare and its illuminated manuscripts became famous, notably the Book of Kildare, which was praised as one of the finest of all illuminated Irish manuscripts before its disappearance three centuries ago. Brigid was one of the most remarkable women of her times, and despite the numerous legendary, extravagant, and even fantastic miracles attributed to her, there is no doubt that her extraordinary spirituality, boundless charity, and compassion for those in distress were real. She died at Kildare on February 1. The Mary of the Gael, she is buried at Downpatrick with St. Columba and St. Patrick, with whom she is the patron of Ireland. Her name is sometimes Bridget and Bride. Her feast day is February 1.

PRAYER
Beloved Father, just before Saint Brigid was born, her Christian mother was sold to a Druid landowner. Even though she grew up oppressed as a slave, she found great joy in loving You. As the patron saint of babies, she has a special concern for the gift of new life, so I ask her to pray for the babies in my family, both born and unborn. May they grow up with Jesus and obtain the joy of knowing Him. I place into Your loving hands, Father, all the babies who died prematurely, through abortion, miscarriage or medical conditions. Ask them, Lord, to intercede for me and my family. Saint Brigid, pray for us.
AMEN.
Celtic Cross of St. Brigid February 1. God's Eye Ireland St. Brigid of Ireland