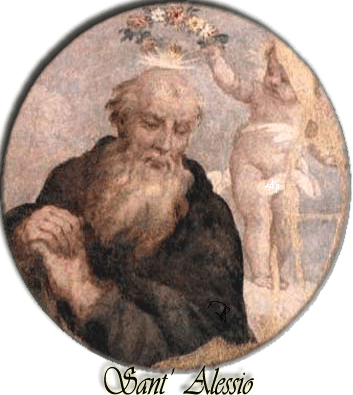 Founder and mystic, one of the first Servants of Mary or Servites. The son of a wealthy merchant in Florence, Italy, Alexis and six companions joined the Confraternity of the Blessed Virgin in Florence in 1225. Gathered together on the Feast of the Assumption in 1233, the group experienced a vision of the Blessed Virgin Mary which inspired them to found a new religious community dedicated to prayer. They founded such a group at La Camarzia, near Florence, moving eventually to Monte Senario, on the outskirts of the city. Another vision inspired Alexis and his companions to form the Servites, or the Servants of Mary. All in the group were ordained priests, except for Alexis, who believed he was not worthy of such an honor. He helped build the Servite church at Cafaggio, and he managed the day-to-day temporal affairs of the congregation. The Servites received papal approval from Pope Benedict XI in 1304. Alexis was the only founding member still alive. He died at Monte Senario on February 17, 1310, recorded as 110 years old. Alexis and his companions are called the Seven Holy Founders.