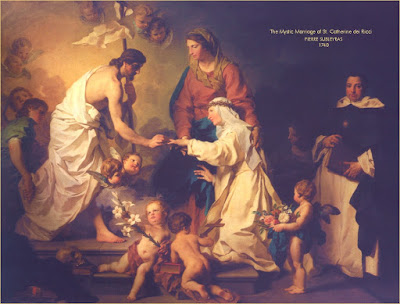 Born in Florence, she was born Alessandra Lucrezia Romola de' Ricci. At age 6, her father put her in the Monticelli
convent near their home where she received an education. After a short time outside the convent, at 14, she went to the Dominican convent of San Vincenzo(St. Vincent) in Prato, Tuscany
. By age 25, she had risen to the post of perpetual prioress. She lived at San Vincenzo until her death in 1590 after a prolonged illness.
As the perpetual prioress of San Vincenzo, she developed into an effective and greatly admired administrator. She was an advisor on various topics to princes, bishops and cardinals. She corresponded with three men who were destined to become popes Pope Marcellus II, Pope Clement VIII, and Pope Leo XI.
An expert on religion, management and administration, her advice was eagerly sought. She gave counsel both in person and through writing letters. It is reported that she was extremely effective and efficient in her work, managing her priorities very well.
It is claimed that her meditation on the passion of Christ was so deep that she spontaneously bled as though scourged, and that a coral ring appeared at times of deep prayer on her finger (representing her marriage to Christ under the covenant of being a nun.) She was a very prayerful person from a very young age.
It is reported that she wore a "sharp iron chain" about her neck, engaged in extreme fasting and other forms of self punishment. Whether her stigmata
were miraculously created, or were the result of self injury while in a state of religious ecstasy is a matter of faith.

Prayer
Father you gave Catherine
the wounds of Christ
so she can love you
more.Let us love you
more by adoring your
holy name.We ask this
through Christ our Lord.
AMEN
February 13 Pope Clement VIII Pope Leo XI Pope Marcellus II stigmata