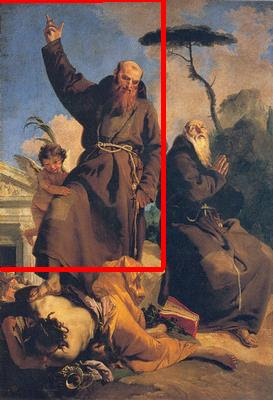 This saint was born in 1556 in Leonessa in Umbria, and at the age of eighteen he made his profession as a Capuchin friar in his hometown, and took the name of Joseph Eufranio instead of its name.
He was humble, obedient and heroic degree mortified, and three days a week, took no other sustenance than bread and water. Generally preached a crucifix in hand, and the fire of his words inflamed the hearts of her listeners. In 1587 he was sent to Turkey as a missionary among the Christians of Pera, a suburb of Constantinople. They cheered and served the Christian slaves in the galleys with wonderful devotion, especially during a malignant fever, which became infected, but later recovered his health. Converted many apostates, and was exposed to the stringency of the Turkish law when he preached the faith to Muslims. Joseph was jailed twice, and the second time he was sentenced to a cruel death.
By sharp claws which crossed one of his hands and one foot was hanging from a gallows. However, after being tortured for hours, was released and his sentence was commuted to banishment. He landed in Venice and, after an absence of two years, returned back to Leonessa, where he resumed his duties with extraordinary zeal. Towards the end of his life suffered as a result of a tumor. For excised, underwent two operations during which breathed not the slightest whimper or complaint, all the time holding a crucifix on which his eyes were fixed. When it was suggested that before the operation should be attached, said the crucifix, saying: "This is the strongest bond, it will subject me better than any rope would." The operation was successful and happily San Jose died on 4 February 1612, at the age of fifty-eight.
He was canonized in 1745.

Prayer
Father may Joseph
help us understand
your word,the Gospel
so we can predict it to
the world.
We ask this through Christ
Our Lord.
AMEN