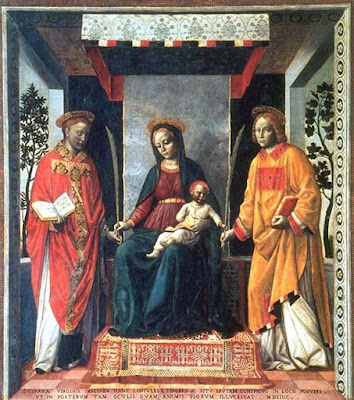 Faustinus and Jovita were brothers, nobly born and natives of Brescia. All the incidents in their reputed "Acts" are of doubtful authority, and we can only be sure of their names and martyrdom. According to the tradition of Brescia, they preached Christianity fearlessly while their bishop lay in hiding. Their zeal excited the fury of the heathens against them, then they were arrested by a heathen lord called Julian. They were tortured and dragged to Milan, Rome and Naples, and then brought back to Brescia. As neither threats nor torments could shake their constancy, the Emperor Hadrian, who happened to be passing through Brescia, commended them to be beheaded. The city of Brescia honors them as its chief patrons and claims to possess their relics. On April 18 the Roman Martyrology names the martyr St. Calocerus, who figures largely in the legendary history of St. Faustinus and Jovita, whose heroic confession he is said to have witnessed when, as a court official, he accompanied Hadrian to his native city Brescia and was present in the amphitheatre. The constancy of the two confessors and the refusal of the wild beasts to touch them brought about his conversion, and he was baptized by Bishop Apollonius with twelve thousand other citizens. He was tortured and imprisoned in several Italian towns notably in Asti, where he instructed St. Secundus who visited him in gaol. Eventually, we are told, he was taken to Albanga in Liguria and beheaded on the seashore.

PRAYER
Lord you crowned these two brothers with the crown of martyrdom,
may we love you unconditionally as they did and have no fear.
We ask this through Christ our Lord.
AMEN.
Brothers Deacon February 15. love for God and Christ martyrs Priest Roman Martyr Ss. Faustinus and Jovita