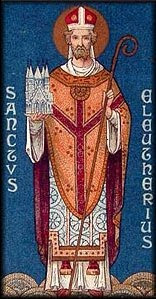 This saint is very popular in northern Europe, lived in a very difficult period in the history of France was probably born in 456 and died in 531.
It is the time when the Gaul, and target several barbarian migrations, such as the Burgundes and that of the Visigoths - badly converted to Christianity, rising from idolatry to the Arian heresy - became a land of conquest of the Franks King Clovis. A conversion of these helped the Christian wife, Clotilde, venerated as a saint, the bishop of Reims, Saint Remigio and Saint Eleuterio, elected Bishop of Tournai in 484, when Clovis had made the city the capital of his kingdom, before to undertake the conquest of the Paris region.
Although historically we do not possess any documents securely on the activity of this holy bishop and his missionary work, a biography attributed to St. Medard, contemporary and even a playmate in childhood, has many stories of life in San Eleuterio and their contacts with the pagan king Clovis. THE Medardo same predicted that one day he would become a bishop, but that prophecy was tantamount to an omen of difficult life, including martyrdom.
The barbarian peoples of the eastern regions that were going moving into the green hills of France, knew no other authority but that of his king. A1 Bishop of Tournai was responsible for the task of spreading the word of God among a rude people and idolatrous, the Franks, in 506 before mass baptism will follow the example of their king, after the victory against the Germans de Tolbiac . But the honor of this abundant harvest will fall to San Remigio. In the cathedral of Tournai, the object of numerous pilgrimages, the remains of San Eleuterio, the humble and tireless worker for the Gospel, which had as its field of work the new frontier of Christianity, represented by the barbarians.

Prayer
Father may the life and
martyrdom of Eleutherius
help us under stand that
your name is so holy we
should always defend it.
We ask this through Christ
our lord.
AMEN