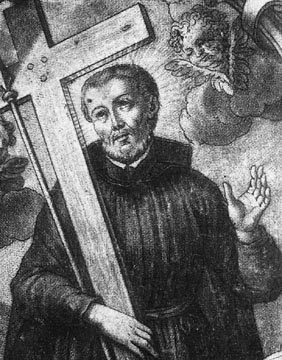 The first carried the announcement of the Christian faith in Japan was Saint Francis Xavier, who worked there from 1549 to 1551. In a few years became Christians around 300,000. Humanly speaking, it is double the "secret" which made possible the expansion: the respect that the Jesuit missionaries were the modes of Japanese life and beliefs not directly opposed to Christian teaching, and commitment of local elements to insert in word and in administration.
Jesuit catechist was a young man named Paul Miki, born between 1564 and 1566, from a rich family from Kyoto. I wanted to be a priest but his ordination was postponed "sine die", because the only diocese had not yet bishop. Furthermore, in 1587 the Emperor Toyotomi Hideyoshi, who proposed the conquest of Korea changed its benevolent attitude towards Christians and issued a decree expelling foreign missionaries.
The order was fulfilled in part: some missionaries remained in the country incognito, and in 1593 some Spanish Franciscans, led by Pedro Bautista, came to Japan from the Philippines and were well received by Hideyoshi. But soon after the final break came, including political anti-Spanish and anti-Western. On December 9, six Franciscans were arrested (Pedro Bautista, Martin de la Asuncion, Francisco Blanco, Philip Las Casas, Francisco de San Miguel and Gonzalo Garcia), three Jesuits (Paul Miki, John Soan de Goto and James Kisai) and fifteen laymen Tertiary Franciscans, who were added after two others were catechists.
After having cut the left lobe, the 26 were brought to Nagasaki meac to expose to the derision of crowds, rather admired the heroic courage expressed especially in the time of death, when they were crucified on a hill Nagasaki on 5 February 1597. Commotion woke the words of forgiveness and evangelical witness uttered by Paul Miki from the cross, and the serenity and courage they demonstrated Luis Ibaraki (11 years), Antonio (thirteen) and Tomas Cosaki (of fourteen), who died singing Psalm: Laudate, pueri, Dominum ...

Prayer
Father may Paul Miki
help us learn that defending
your Son's name is
worth dieing for so we can
always love on Earth and in
Heaven.
We ask this through Christ
our Lord.
AMEN