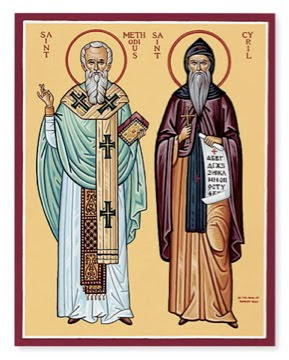 The two brothers Michael and Constantine, as monks took the name of Cyril and Methodius, respectively, did their missionary work in the ninth century in central Europe, and rightly are called the "apostles of the Slavs". They have the merit of having adapted to the people who came to evangelize and missionaries who used methods, although they had all the pope's approval, opposition arose between the Greeks and Latins.
They have the merit of having created a new alphabet called "Cyrillic" precisely by St. Cyril, offering the Slavic world, with translations of the Bible, the Missal and Ritual liturgical, linguistic and cultural unity. This great gift to the brothers Cyril and Methodius to the Slavs did was rewarded with love and devotion popular. But during his life, not everything was easy for the two holy missionaries, but had to fight hard against those who always oppose the great innovators.
The two brothers were born in Thessaloniki. They were sons of an imperial employee and knew the Slavic spoken in Macedonia. Constantine, the youngest, was born around 827, completed his studies at Constantinople under Photios, and after his ordination he devoted himself to teaching. Michael, however, followed the political career, but when he became governor of a Slavic-speaking Byzantine province, resigned from the desired position and became a monk by the name of Methodius. In the 860s the emperor ordered the two brothers the evangelization of Kazarian, and three years later came to Moravia at the invitation of Prince Ratislao. It was here where he developed the alphabet "Cyrillic" and translated the Bible where and missal in Slavonic. Cyril and Methodius were accused of schism and heresy, and therefore had to travel to Rome, where he warmly greeted Pope Adrian II, who allowed them to celebrate the sacred mysteries in Slavonic, being even present him with a community Christian very numerous.
St. Cyril died in Rome on 14 February 869 and was buried in the basilica of St. Clement, the martyr whose relics he had brought to Rome. Methodius, ordained by the Pope and appointed bishop of Pannonia, returned from their Slavic. He died on 6 April in the year 885 in the city of Velahrad (Czechoslovakia) and his funeral was used together with Slavic, Greek and Latin.

Prayer
Father may Saints Cyril
and Methodius help
us understand the word
of Christ so we to can
preach it.
AMEN