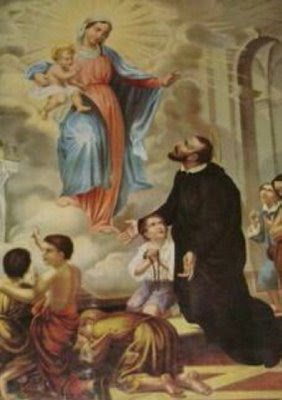 We know very little about the early life of St. Jerome Emiliani(or Miani Miano also). Born in Venice in 1486, and like all important families followed a military career. In 1511 Castelnuovo was captured while fighting in the League of Cambrai. During his captivity, he dedicated himself to meditate on the impermanence of worldly power, as happened ten years after St. Ignatius of Loyola. Unexpectedly, was released a month later, and then felt alive vocation dedicated to serving the poor, the sick, young women abandoned and "repentance". A very vast field. After a short "novitiate" as a penitent with Giampietro Carafa, the future Paul IV, Jerome was ordained in 1518.
Ten years later there was a tremendous shortage throughout the region and then a plague epidemic, then Jerome sold everything he had, including home furnishings, and devoted himself to the care of the infected. We had to bury the dead, and it was getting dark. But we also had to think about the living, especially in children who had lost their parents, and women who by necessity engaged in prostitution. Verona, Brescia, Como, Bergamo was the field of his beneficent action. It was then in Somasca founded the Order of Clerics Regular, designed to help orphans and the poor. Parents were Somaschi who made the big project of the founder: the institution of free schools for all and in the adoption of the revolutionary method called "dialogical method".
St. Jerome Emiliani died on the groove: while attending plague patients Somasca, was attacked by the same fever and died among its favorite sons: the poor and sick, who had devoted all his efforts. It was on February 8, 1537. He was canonized in 1767 and in 1928 Pius XI named him patron of orphans and abandoned youth. Before the calendar reform, his feast was celebrated on July 20.He is patron saint of orphans and abandoned children.

Prayer
Almighty and eternal God
may your servant Jerome
help us be better Christians
so we can love you more
each day.
We ask this through Christ our
Lord.
AMEN