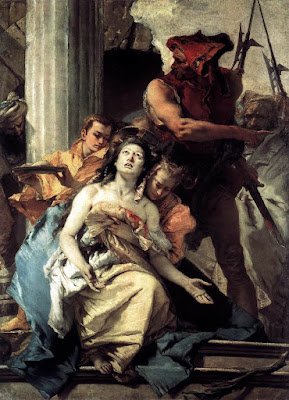 Although we have evidence that Agatha was venerated at least as far back as the sixth century, the only facts we have about her are that she was born in Sicily and died there a martyr.
In the legend of her life, we are told that she belonged to a rich, important family. When she was young, she dedicated her life to God and resisted any men who wanted to marry her or have sex with her. One of these men, Quintian, was of a high enough rank that he felt he could force her to acquiesce. Knowing she was a Christian in a time of persecution, he had her arrested and brought before the judge - - himself. He expected her to give in to when faced with torture and possible death, but she simply affirmed her belief in God by praying: "Jesus Christ, Lord of all, you see my heart, you know my desires. Possess all that I am. I am your sheep: make me worthy to overcome the devil."
Legend tells us that Quintian imprisoned her in a brothel in order to get her to change her mind. Quintian brought her back before him after she had suffered a month of assault and humiliation in the brothel, but Agatha had never wavered, proclaiming that her freedom came from Jesus. Quintian sent her to prison, instead of back to the brothel -- a move intended to make her more afraid, but which probably was a great relief to her. When she continued to profess her faith in Jesus, Quintian had her tortured. He refused her any medical care but God gave her all the care she needed in the form of a vision of St. Peter. When she was tortured again, she died after saying a final prayer: "Lord, my Creator, you have always protected me from the cradle; you have taken me from the love of the world and given me patience to suffer. Receive my soul."
Because one of the tortures she supposedly suffered was to have her breasts cut off, she was often depicted carrying her breasts on a plate. It is thought that blessing of the bread that takes place on her feast may have come from the mistaken notion that she was carrying loaves of bread. As we see in the picture above, we can see Agatha with a bloody cloth covering her breast, this is an image of her after she had her breast cut off. Agatha was only 20 years old when she was killed.

PRAYER
Lord God, you showered heavenly gifts
on the virgin Agatha.
Hear the prayers of those who recall her devoted life
and who ask her to intercede for them in their necessity.
Help us to imitate her virtue during our earthly life
and enjoy eternal happiness with her in heaven.
AMEN.
Breast Cut of her Breast February 5. martyr St. Agatha Virgin