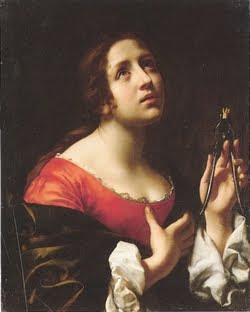 St. Apollonia's feast day is February 9. In Alexandria, Egypt, where Christians were being persecuted, Apollonia was dragged from her home and beaten by crowds of pagans. In the process of her beatings, all of her teeth were knocked out. This took place around the year 249.
The crowd threatened to throw her into a fire if she did not denounce God. As the legend goes, she told the crowd to wait for a brief moment, and then leapt into the flames on her own accord. St. Apollonia courageously became a martyr.
Rather than give a wild crowd what they wanted, Apollonia stuck firmly to her beliefs and shows to die instead of giving in to the power of the crowd.
Because Apollonia lost all of her teeth in the struggle, she is known as the patron saint of dentistry, and anyone suffering from dental problems should pray to St. Apollonia for their fast recovery.
Apollonia is often seen with pincers holding a tooth. She is also sometimes portrayed with a necklace with a golden tooth at the end.
Many Christians were being persecuted in Alexandria at the time Apollonia leapt into the fire, becoming a martyr. It was a difficult time for those who followed the Christian faith, these people were being ridiculed and persistently question, tortured and threatened with their lives. Rather then renounce Christ, Apollonia shows to go directly to Christ, by leaping into the fire.
After Apollonia's life, and her subsequent canonization, a great debate ensued. Was Apollonia truly a martyr, or did she commit suicide? That question really cannot be answered in the scope of this article, but has been a topic of discussion -- literally -- for centuries. St. Augustine declared Apollonius' act "heroic faith."

PRAYER
God our Father,
you give us joy each year
in honoring the memory of Saint Apollonia.
May her prayers be a source of courage and let it be our inspiration.
Grant this through Christ our Lord
AMEN.
Alexandria burned alive Dentist Egypt February 9. martyr St. Agustine of Hippo St. Apollonia teeth The City of God