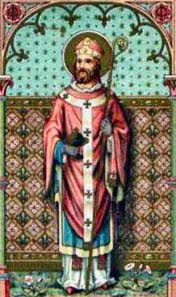 St. Peter , who was one of the most famous orators of the Catholic Church , was born in Imola , Italy and was formed by the Bishop of that city Cornelius, by which always retained a great veneration. Bishop Cornelio St. Peter convinced that in the domain of their own passions and lusts reject lies the true greatness, and that this is a sure way to get the blessings of God. St. Peter enjoyed the friendship of the Emperor Valentinian and his mother, Placida, and on the recommendation of the two, he was appointed archbishop of Ravenna. We also enjoyed the friendship of Pope Saint Leo the Great. When it became archbishop of Ravenna, had in this city a large number of pagans. And it worked so enthusiastically to convert them , that when he died and the pagans were very few non-believers in this place. A lot of people liked his sermons, and so gave him the nickname of Chrysologus , which means , that speaks very well. His manner of speech was concise , simple and practical. People were astonished that in sermons rather short , was able to summarize the most important truths of the faith. it is preserved , 176 sermons, very well prepared and carefully worded. For his great wisdom to preach and write, was named Doctor of the Church by Pope Benedict XIII. We strongly recommend frequent Communion and exhorted his listeners to turn the Holy Eucharist in their food every week. He died on 30 July 451.