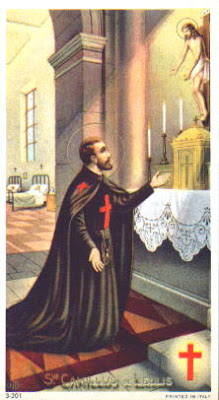 Born in Abruzzo ( Italy) in 1550. He followed a military career like his father . He appeared a sore on his foot, he did leave the profession of arms and go to the Hospital of Santiago in Rome to get healed. At the hospital in Rome was dedicated to helping and caring for other patients, while seeking their own healing . But at that time became the vice of gambling . He was expelled from Naples hospital and lost all their life savings in the game , leaving in poverty. Long ago, in a shipwreck , had made to God 's promise to become a Franciscan monk , but had not met. While in absolute poverty is offered as a worker and a messenger in a convent of the Capuchin Fathers , where he heard a talk spiritual father made them superior to the workers, and felt strongly the call of God to his conversion. He began to mourn and asked forgiveness for their sins, with firm resolve to change their ways completely. He was 25. Asked to be admitted as a Franciscan convent but he reopened the wound in the foot,
Camillus de Lellis , Saint
and was dismissed. He went to hospital and was cured , and made for his admission as a candidate for cappuccino. But in the novitiate again appeared sore and had to leave there too. Back at the hospital in Santiago , was devoted to caring for other patients, for which he was named assistant general hospital. Spiritually directed by St. Philip Neri , he studied theology and was ordained priest. In 1575 he realized that given the large number of pilgrims coming to Rome , hospitals were unable to properly attend to the sick who came . It was then decided to found a religious community that is devoted entirely to hospitals. St. Camillus was to treat each patient as our Lord Jesus Christ himself. Although he endured for 36 years, the wound of his foot , no one was sad or moody . With his best collaborators founded the Community Servants of the Sick on December 8, 1591 . Camilo Fathers are now called . He died on July 14, 1614 , at age 64 . He was canonized in 1746 by S.S. Benedict XIV.