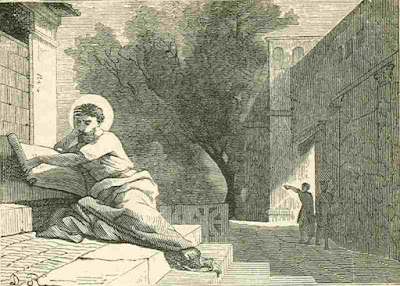 Saint Alexius, born in Rome in the fourth century, was the only son of parents pre-eminent among the Roman nobles for both their virtue and their great wealth. They were particularly noted for their almsgiving; three tables were prepared every day for all who came for assistance — pilgrims, the poor and the sick. Their son, fruit of their prayers, was married with splendid feasting to a noble young lady of the imperial family, but on his wedding night, by God’s special inspiration, he secretly left Rome, longing for a solitude where he could serve God alone. He went to Edessa in the far East, gave away all that he had brought with him, content thereafter to live by alms at the gate of Our Lady’s church in that city. His family, in the deepest grief, could not fathom the mystery of his disappearance, and would have been consoled if God had taken him instead through death.

It came to pass that the servants of Saint Alexius, whom his father had sent in search of him, arrived in Edessa, and seeing him among the poor at the gate of Our Lady’s church, gave him an alms, not recognizing him. Whereupon the man of God, rejoicing, said, “I thank You, Lord, who have called me and granted that I should receive for Your Name’s name’s sake an alms from my own slaves. Deign to fulfill in me the work You have begun.”

After seventeen years spent at the portico of the church, when his sanctity was miraculously confirmed by the Blessed Virgin, speaking through Her image to an officer of the church, Saint Alexius once more sought obscurity by flight. On his way to Tarsus contrary winds drove his ship to Rome. There no one recognized, in this pale and tattered mendicant, the heir of Rome’s noblest house, not even his sorrowing parents, who had vainly sent throughout the world in search of him. From his own father’s charity Saint Alexius begged a miserable shelter in his palace, under a staircase, with the leavings of his table as food. There he spent another seventeen years, bearing patiently the mockery and ill usage of his own servants, and witnessing daily the still inconsolable grief of his spouse and parents.

At last, when death had ended this cruel martyrdom, they learned too late, in the year 404, who it was that they had unknowingly sheltered. A voice was heard by all in attendance at the Pope’s Mass, saying: “Seek the man of God, he will pray for Rome, and the Lord will be favorable to it; he will die Friday.” All the city undertook in vain to find this unknown Saint. But God had commanded Alexius himself to write down his life story and sign it, in this way He Himself confirmed His servant’s sanctity, when he was found lifeless in his retreat, holding that document in his hand. The Pope read aloud what was written on the parchment of the Saint, and everywhere in Rome there was a single cry of admiration, impossible to describe. The house of Alexius’ father Euphemian was later transformed into a church dedicated to Saint Alexius.
Arranged marriage catechist hermit July 17 St. Alexius of Rome vision of the Virgin Mary