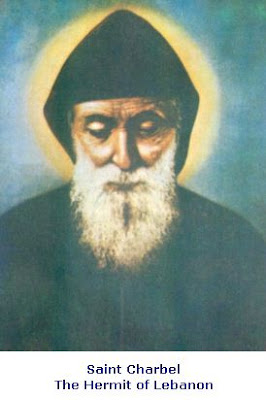 Youssef (Joseph) was born on May 8, 1828 in a small town in Lebanon called Biqa - Kafra. It was the fifth son of Anthony and Bridget Choudiac Makhlouf , simple peasants with faith . Two of his maternal uncles were monks in the monastery of Quzhaya which was about an hour away from Biqa - Kafra. Joseph frequently visited and stayed with them helping with the divine , sharing in their prayers and songs and listening to their wise counsel. I was twenty when he left home and family to enter the monastery of Our Lady of Mayfouk Lebanese Maronite Order . Upon receiving the habit of a novice it changed its name to Charbel , a name of a martyr of the Church of Antioch who died in the year 107 under the rule of Trajan. When his mother and his uncle learned of his decision, immediately went to fetch the monastery trying to convince him to return. Finally , Bridget, also convinced his son 's vocation , he said: If you were not to be good religious I would say : Go home ! But now I know the Lord loves you at your service. And in my pain at being separated from you, I say resigned : May God bless you , my son, and make you a saint ...! From a young age had developed an intense interior life and prayer that during his years as a monk had matured. Soon he woke up in the hermit's life vocation , according to Christian tradition , it must be living in solitude. He retired to the hermitage of St. Peter and St. Paul in an Nour Gebel (Mountain of Light ), which had only two tiny rooms and a chapel too narrow . He began this austere life in 1875 and led for twenty years. Be exercised in various mortifications and constant prayer , he slept on the floor and ate only once a day. Ordinarily Mass officiated by noon so that spent the morning preparing for the Holy Sacrifice and evening giving thanks to God. He lived in absolute retirement, of which only came out to meet some pastoral need. On December 16, 1898 was celebrating Mass at eleven o'clock in the morning, when he suffered a paralytic stroke at the time of consecration. He died on 24 December and is buried in the Monastery of St. Maron , the current goal of pilgrimages and miracles constant . He was canonized on October 9th, 1977 by Pope Paul VI.

Prayer
Father almighty may the life and
death of your servant Charbel
help us in our daily struggles against
evil so we can protect the Holy Catholc Church
and Preach the Gospel around the world. We ask
this through Christ our Lord.
AMEN