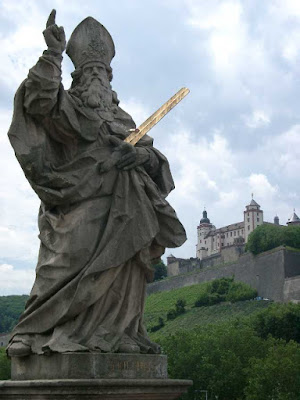 Saint Kilian, also spelled Killian (or alternatively Irish: Cillian), was an Irish missionary bishop and the apostle of Franconia (nowadays the northern part of Bavaria), where he began his labours towards the end of the 7th century.

There are several biographies of him. The oldest texts which refer to him are an 8th century necrology at Würzburg and the notice by Hrabanus Maurus in his martyrology. According to Maurus, Kilian was a native of Ireland, when with eleven companions he went to eastern Franconia and Thuringia. After having preached the Gospel in Würzburg, he succeeded in converting to Christianity the local lord, Duke Gozbert, and much of the population.

Kilian eventually told the Duke that he was in violation of sacred scripture by being married to his brother's widow, Geilana. When Geilana (whom Kilian had failed to convert to Christianity) heard of Kilian's words against her marriage, she was so angry that she had her soldiers sent to the main square of Würzburg, where Kilian and his colleagues were preaching, and had him beheaded, along with two of his companions, Saint Colmán (also called Colonan or Kolonat) and Saint Totnan. It is difficult to fix the date with precision, as Gozbert and Geilana are only known through these two somewhat imprecise Church records.

The elevation of the relics of the three martyrs was performed by Burchard, the first Bishop of Würzburg. Their skulls, inlaid with precious stones, have been preserved to this day. On St Kilian's day, a glass case containing the three skulls is removed from a crypt, paraded through the streets before large crowds, and put on display in Würzburg Cathedral (dedicated to Kilian). Statues of these three saints (among others) line the famous Saints' Bridge across the River Main.

According to Irish sources, Kilian was born in Mullagh, Co Cavan, Ireland and is the patron saint of the parish of Tuosist, near Kenmare in County Kerry, where he is believed to have resided before travelling to Germany. A church and holy well are named after him and his feast day, July 8, is traditionally celebrated with a pattern when crowds visit the well for prayers, followed by evening social events.