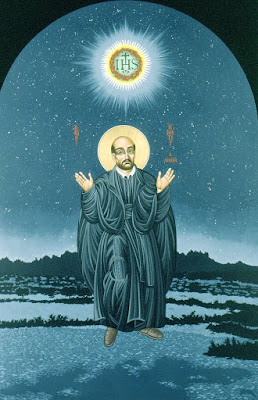 St. Ignatius was born in the family castle in Guipúzcoa, Spain, the youngest of 13 children, and was called Iñigo López de Recalde. When he was old enough, he became a page, and then a soldier of Spain to fight against the French. Eventually he found himself at the age of 30 in May of 1521 as an officer defending the fortress of the town of Pamplona against the French, who claimed the territory as their own against Spain. The Spaniards were terribly outnumbered and the commander of the Spanish forces wanted to surrender, but Ignatius convinced him to fight on for the honor of Spain, if not for victory. During the battle a cannon ball struck Ignatius, wounding one leg and breaking the other. Because they admired his courage, the French soldiers carried him back to recuperate at his home, the castle of Loyola, rather than to prison.
His leg was set but did not heal, so it was necessary to break it again and reset it, all without anesthesia. Ignatius grew worse and was finally told by the doctors that he should prepare for death.
On the feast of Saints Peter and Paul (29 June) he took an unexpected turn for the better. The leg healed, but when it did the bone protruded below the knee and one leg was shorter than the other. This was unacceptable to Ignatius, who considered it a fate worse than death not to be able to wear the long, tight-fitting boots and hose of the courtier. Therefore he ordered the doctors to saw off the offending knob of bone and lengthen the leg by systematic stretching. Again, all of this was done without anesthesia. Unfortunately, this was not a successful procedure. All his life he walked with a limp because one leg was shorter than the other.

During the long weeks of his recuperation, he was extremely bored and asked for some romance novels to pass the time. Luckily there were none in the castle of Loyola, but there was a copy of the life of Christ and a book on the saints. Desperate, Ignatius began to read them. The more he read, the more he considered the exploits of the saints worth imitating. However, at the same time he continued to have daydreams of fame and glory, along with fantasies of winning the love of a certain noble lady of the court, the identity of whom we never have discovered but who seems to have been of royal blood. He noticed, however, that after reading and thinking of the saints and Christ he was at peace and satisfied. 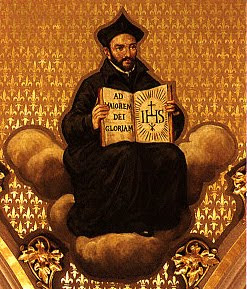 Yet when he finished his long daydreams of his noble lady, he would feel restless and unsatisfied. Not only was this experience the beginning of his conversion, it was also the beginning of spiritual discernment, or discernment of spirits, which is associated with Ignatius and described in his Spiritual Exercises.

After traveling and studying in different schools, he finished in Paris, where he received his degree at the age of 43. Many first hated St. Ignatius because of his humble Lifestyle. Despite this, he attracted several followers at the university, including St. Francis Xavier, and soon started his order called The Society of Jesus, or Jesuits. There are 38 members of the Society of Jesus who have been declared Blessed, and 38 who have been canonized as saints.
Counter Reformation IHS Jesuit Jesuit Priest July 31 mystics Soldier Spanish jesuits Spiritual exercises Spnish Pilgrims St. Ignatius of Loyola