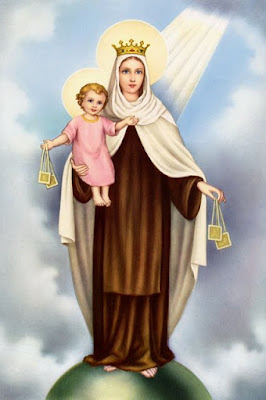 Memory of the Blessed Virgin Mary of Mount Caramel, where Elijah Mount got the people of Israel return to worship the living God and in which , later , some, seeking solitude , retired to a hermit life , giving origin over time to a religious order of contemplative life, which has as patron and protector of the Mother of God.
From the old hermits who settled on Mount Caramel , Carmelites have been known for his deep devotion to the Blessed Virgin. They interpreted the cloud vision of Elijah (1 Kings 18 , 44) as a symbol of Mary Immaculate. Already in the thirteenth century , five centuries before the proclamation of the dogma , the Carmelite Missal contained a Mass for the Immaculate Conception.
In the words of Benedict XVI , 15, VII , 06:
"Caramel , high promontory that rises on the east coast of the Mediterranean Sea , at the height of Galilee , is in her skirts numerous natural grottoes, favorites of hermits. The most famous of these men of God was the great prophet Elijah, who in the ninth century BC valiantly defended the pollution of idolatrous worship the purity of faith in the one true God . Inspired by the figure of Elijah , came the Contemplative Order of the " Carmelite " religious family that counts among its members great saints such as Teresa of Avila , John of the Cross , Teresa of the Child Jesus and Teresa Benedicta of the Cross (in the world , Edith Stein) . The Carmelites have spread among the Christian people devotion to the Blessed Virgin Mount Caramel , pointing as a model of prayer, contemplation and dedication to God. Mary, in fact , before and in an unsurpassable way , believed and felt that Jesus , the Incarnate Word , is the summit , the summit of man's encounter with God . Welcoming the Word fully , " she happily reached the holy mountain " (Prayer of the collection of the Report) , and lives forever , in soul and body, with the Lord. To the Queen of Mount Caramel today I want to entrust all communities contemplative life spread throughout the world, especially those of the Carmelite Order, among which I remember the monastery of Quart, not far from here [ Aosta Valley ]. May Mary help all Christians to find God in the silence prayer.
Star of the Sea and the Carmelites
The sailors, before the age of electronics, depended on the stars to make their way in the vast ocean. Hence the analogy with the Virgin Mary who, as star of the sea, guides us through the difficult waters of life to the safe harbor that is Christ.
For the invasion of the Saracens , the Carmelites were forced to leave Mount Caramel. An ancient tradition tells us that before leaving the Virgin appeared to them as they sang the Salve Regina and she promised to be for them a Star of the Sea that beautiful name also known as Lady Mount Caramel stands as a star next to Tues
The Carmelites and devotion to the Virgin del Carmen are spread through the world
Mary Immaculate , Star of the Sea , is the Virgen del Carmen , ie which is venerated in ancient times in Caramel. She accompanied the Carmelite order as the spread around the world. The Carmelites are known for their devotion to the Mother of God, and that she sees the fulfillment of the ideal of Elijah. He was even called " Brothers of Our Lady of Mount Caramel. " In his religious profession devoted themselves to God and Mary, and took the habit in her honor as a reminder that their lives belonged to her and for her, to Christ.
Devotion to the Virgin del Carmen are spread particularly in places where the Carmelites were established.
Spain
Among the places where the Virgin venerated in Spain as the patron saint of Spain is Beniaján , Murcia. See more images here .
America
It is the patron saint of Chile in Ecuador is queen of the region of Cuenca and Azuay , receiving the papal coronation July 16, 2002 . In the monastery church of the Assumption in Cuenca is revered more than 300 years ago . It is also revered by many across the continent.

Prayer
Father you gave us the apparition
of Our Lady of Mount Carmel to be
a sign of hope for us so she can intercede
for us so we can reach the Kingdom of Heaven.
We ask this through Christ our Lord.
AMEN

Sorry for the last week of our inability to post the saints on our blog, we have been having technical issues with our computer. But we encourage you to visit Catholic.org and Catholic.net to get the saints of the day when we are not available...again sorry for this inconvinience.