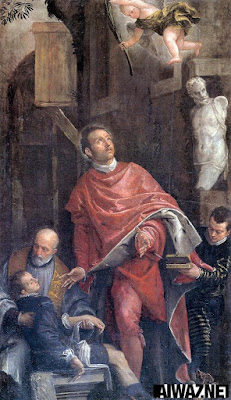 Nikomedia born doctor (now Turkey). He was beheaded by profess their Catholic faith in the persecution of Roman Emperor Diocletian, on 27 July 305.

What is known of St. Pantaleon comes from an ancient manuscript of the sixth century that is in the British Museum. Pantaleon was the son of a pagan named Eubulus and Christian mother. Pantaleon was a doctor. His teacher was Euphrosino , the doctor most notable of the empire. He was a doctor of the emperor Galerius Maximian in Nicomedia.

He knew the faith but was carried away by the pagan world in which he lived and succumbed to the temptations that weaken the will and end with the virtues and fell into apostasy. A good Christian named Hermolaos opened his eyes , exhorting him to know " healing from the Highest " , led him to the bosom of the Church. Since then turned their science to the service of Christ, to serve their patients on behalf of the Lord.

In the year 303, began the persecution of Diocletian in Nikomedia . Pantaleon gave everything he had to the poor. Some doctors out of envy, he betrayed to the authorities. He was arrested along with Hermolaos and two Christians. The emperor , who wanted to save him in secret , told her apostasy , but he refused and immediately Pantaleon miraculously cured a paralytic to prove the truth of faith. The four were sentenced to be beheaded. San Pantaleon died a martyr at the age of 29 years on 27 July 304. He died for the faith that had once denied. Like St. Peter and St. Paul , had the opportunity to repair and to express his love to the Lord .

The minutes of his martyrdom miraculous facts tell us : They tried to kill him in six different ways , with fire, molten lead , choking , throwing to the beasts , tortured at the wheel and a sword piercing . With the help of the Lord , Pantaleon was unharmed. Then they beheaded freely allowed and milk came out your veins instead of blood and the olive tree where the event occurred immediately flourished . Could it be that these stories are a symbolic way of extolling the virtues of the martyrs, but in any case , the important thing is that Pantaleon shed his blood for Christ and Christians took it as an example of holiness .

In the East we have great veneration as a martyr and as attending physician to the poor for free . It was also very famous in the West since antiquity.

Are still some relics of his blood, in Madrid ( Spain) , Constantinople (Turkey) and Ravello ( Italy).

The Miracle of blood

A portion of their reserves in a blood blister on the altar of the Real Monasterio de la Encarnación in Madrid de los Austrias , next to the Plaza de Oriente, Madrid , Spain. It was taken from another larger than is saved in the Italian Cathedral of Ravello. It was donated to the monastery together with a piece of bone from a saint by the Viceroy of Naples. In Madrid the Augustinian Recoletos guard the devoted to prayer. There is evidence that the relic was already in the incarnation since its founding in 1616.

Blood , solid throughout the year, liquefaction [or liquefaction phenomenon occurs ], like the blood of San Gennaro , without human intervention . This occurs on the eve of the anniversary of his martyrdom, or every 26 July. This has happened every year until the date of this writing, 2005, when they celebrate 1700 years of his martyrdom. In that year the miracle took place while the nuns were praying in the church choir and in the presence of hundreds of visitors. The monastery opens its doors to the public for all to witness . Sometimes the blood has been slow to solidify to signal a crisis, as occurred during the two world wars.

Many attempts have been made to explain the phenomenon by purely natural mechanisms , such as temperature and moon phases . However, none of the explanations has been successful in science. The church has not been defined on the miracle. The sisters say simply that it is " a gift from God. "

To facilitate public view and prevent deterioration of the relic , in 1995 the nuns installed television monitors that increase ten times the image of the capsule containing the blood of the saint.

The martyr 's blood liquefies a doctor . What God tells us this wonder ? .

Did not need this courageous witness who gave his life by faith. His blood reminds us of our own responsibility to live the faith in a time where so many fall into apostasy or simply indifference. The need the example of St. Pantaleon , who knew how to live their profession in the service of Jesus Christ.