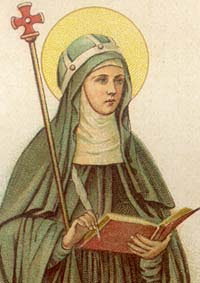 St. Bridget was the mother of eight children. After her husband died she entered a life of penance with lots of fasting and prayer vigils. Her mystical visions became frequent. The Lord revealed to her that she was to become His bride and perform the task of informing the world of His warnings and messages. She received so many revelations that there was no reason to doubt this one. Despite the fact that private revelations never replace or modify doctrines of the faith, hers were credible and taken seriously by many religious.

Her first revelation was when she was a young girl of seven. She saw a beautiful lady who offered her a crown and placed it on her head and Bridget felt its touch before the vision disappeared. When she was ten she had a vision of crucified Christ with blood flowing through His wounds. Her mother died* when she was eleven or twelve and she was raised by a pious
Fourteen Holy Helpers July 23. vision of christ vision of the Virgin Mary