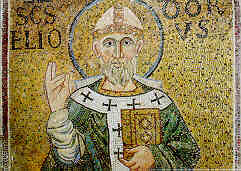 Saint Heliodorus was the first bishop of Altinum (Altino) in the century. He was born at Dalmatia. Like Chromatius, he was a disciple of Valerianus, the bishop of Aquileia.

He accompanied Saint Jerome on his voyage to the Holy Land, and is mentioned in Jerome's letters. After the death of his mother, Heliodorus went to Italy and was made bishop of Altino. He attempted to counter Arianism in his see, and assisted at the Council of Aquileia (381). Saint Nepotian, a nephew of Saint Heliodorus, was ordained by the bishop after leaving his position as an officer in the imperial bodyguard.

A legend, composed around the 10th century and incorporating elements from other saints’ hagiographies, states that Liberalis of Treviso was educated in the Christian faith by Heliodorus. The legend goes on to state that, faced with growing opposition from both Arianism and paganism in the see, Heliodorus retired as bishop and lived as a hermit on a desert island in the lagoons near Altino, entrusting the see to a man named Ambrose. Worried about Ambrose’s ability to handle the rise of Arianism in the see, Liberalis decided to look for Heliodorus and attempt to convince him to come back to his see, but died on the way, and was later venerated as a saint.
Italian Bishops Italian Saints July 3 St. Heliodorus of Altine