Feast of the Most Precious Blood 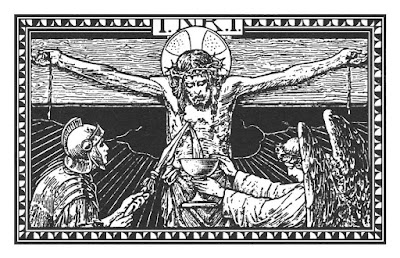 July 1 is the Solemnity of the "Most Precious Blood of Our Lord Jesus Christ." This feast, celebrated in Spain in the 16th century, was later introduced to Italy by Saint Gaspar del Bufalo and extended to the whole Church by Pope Pius IX in 1849.

For many dioceses there were two days to which the Office of the Precious Blood was assigned, the office being in both cases the same. The reason was this: the office was at first granted to the Fathers of the Most Precious Blood only. Later, as one of the offices of the Fridays of Lent, it was assigned to the Friday after the fourth Sunday in Lent. In many dioceses these offices were adopted also by the Fourth Provincial Council of Baltimore (1840).

When Pope Pius IX went into exile at Gaeta in the Kingdom of the Two Sicilies (1849), he had as his companion Father Giovanni Merlini, third superior general of the Fathers of the Most Precious Blood. After they had arrived at Gaeta, Don Merlini suggested that His Holiness make a vow to extend the feast of the Precious Blood to the entire Church, if he would again obtain possession of the Papal dominions. The Pope took the matter under consideration, but a few days later sent his domestic prelate Joseph Stella to Don Merlini with the message: "The pope does not deem it expedient to bind himself by a vow; instead His Holiness is pleased to extend the feast immediately to all Christendom." This took place on June 30, 1849, the day the French army conquered Rome and the republicans capitulated.

As June 30 had been a Saturday before the first Sunday of July, Pope Pius IX decreed on August 10, 1849, that henceforth every first Sunday of July should be dedicated to the "Most Precious Blood of Our Lord Jesus Christ." This feast was instituted by him in thanksgiving for the victory of the Papal and French army over the revolutionary forces which had driven him from Rome.

Pope Pius XI raised this feast to the rank of Double of the 1st Class to mark the nineteen hundredth anniversary of Our Lord's death.

In Catholic belief, the Blood of Christ is precious because it is Christ's own great ransom paid for the redemption of mankind. As there was to be no remission of sin without the shedding of blood, the Incarnate Word not only offered His life for the salvation of the world, but he offered to give up His life by a bloody death, and to hang bloodless, soulless and dead upon the Cross for the salvation of men. There, upon the Cross, He atoned for every form of human sin. "God was indeed Christ, reconciling the world to Himself." He shed His Precious Blood for all - for Jew and Gentile, for heathen and Christian, for Turk and heretic, for the infidel and all unbelievers. In that Blood of Jesus our sins have shed, which is at the same time the price of our redemption.