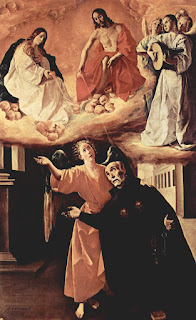 Confessor and Lay brother, also called Alonso. He was born in Segovia, Spain, on July 25, 1532, the son of a wealthy merchant, and was prepared for First Communion by Blessed Peter Fabre, a friend of Alphonsus' father. While studying with the Jesuits at Alcala, Alphonsus had to return home when his father died. In Segovia he took over the family business, was married, and had a son. That son died, as did two other children and then his wife. Alphonsus sold his business and applied to the Jesuits. His lack of education and his poor health, undermined by his austerities, made him less than desirable as a candidate for the religious life, but he was accepted as a lay brother by the Jesuits on January 31, 1571. He underwent novitiate training and was sent to Montesion College on the island of Majorca. There he labored as a hall porter for twenty-four years. Overlooked by some of the Jesuits in the house, Alphonsus exerted a wondrous influence on many. Not only the young students, such as St. Peter Claver, but local civic tad and social leaders came to his porter's lodge for advice and direction. Obedience and penance were the hallmarks of his life, as well as his devotion to the Immaculate Conception. He experienced many spiritual consolations, and he wrote religious treatises, very simple in style but sound in doctrine. Alphonsus died after a long illness on October 31, 1617, and his funeral was attended by Church and government leaders. Alphonsus was named a patron of Majorca in 1633. St. Alphonsus is also presumed to have written the "Little Office of the Immaculate Conception." After his death many manuscripts were found and later published with the title "Obras Espirituales del B. Alonso Rodriguez ." In 1760 Pope Clement XIII said "the virtues of the Venerable Alonso were proved to be of a heroic degree", but the fact that the Jesuits were Exiled from Spain in 1773 delayed his beatification until 1825. On September 6th, 1887 he was canonized along with St. Peter Claver, one of his most beloved collaborators.


Prayer to St. Alphonsus Rodriguez
Holy are you Alphosus, being chosen by Christ, and with such rage and dignity you have always shown when defending the faith and the will of GOD. During your life you helped changed many lives for the best. So now I come to your holy presence so I may ask the heavens that they may grant me a grace our of all your good deeds and by the intercession of your noble spirit. AMEN.