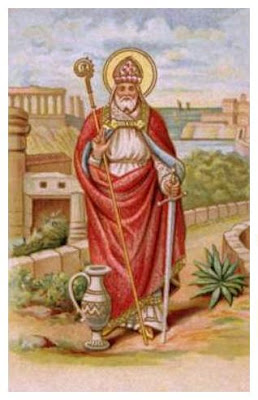 Saint Narcissus from his youth applied himself with great care to the study of both religious and human disciplines. He entered into the ecclesiastical state, and in him all the sacerdotal virtues were seen in their perfection; he was called the holy priest. He was surrounded by universal esteem, but was consecrated Bishop of Jerusalem only in about the year 180, when he was already an octogenarian. He governed his church with a vigor which was like that of a young man, and his austere and penitent life was totally dedicated to the welfare of the church.

In the year 195, with Theophilus of Cesarea he presided at a council concerning the celebration date of Easter; it was decided then that this great feast would always be celebrated on a Sunday, and not on the day of the ancient Passover.

God attested his merits by many miracles, which were long held in memory by the Christians of Jerusalem. One Holy Saturday the faithful were distressed, because no oil could be found for the church lamps to be used in the Paschal vigil. Saint Narcissus bade them draw water from a neighboring well and after he blessed it, told them to put it in the lamps. It was changed into oil, and long afterwards some of this oil was still preserved at Jerusalem in memory of the miracle.

The virtue of the Saint did not fail to make enemies for him, and three wretched men charged him with an atrocious crime. They confirmed their testimony by horrible imprecations. The first one prayed that he might perish by fire, the second that he might be wasted by leprosy, the third that he might be struck blind, if the accusations they made against their bishop were false. The holy bishop had long desired a life of solitude, and at this time he decided it was best to withdraw to the desert and leave the Church in peace. But God intervened on behalf of His servant, when all three of the bishop’s accusers suffered the penalties they had invoked. Narcissus could then no longer resist the petitions of his people; he returned to Jerusalem and resumed his office. He died in extreme old age, bishop to the last.

Now let us invoke Saint Narcissus in hope that we too may reach eternal life. Just as he carried his soul to into heaven may he also carry our souls into heaven so that we may worship GOD forever and ever.
-Thank you and Peace be with you.