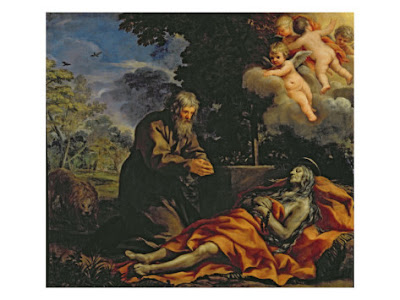 Mary lived in Egypt between the 5th and 6th century, where she was thus given the title of Mary of Egypt. At the beginning of her teenage years Mary, like many of us believed she was now fully independent of her life, and believed the choices she made would not really matter for she was in control. At the age of twelve she made up her mind and left her home and set out for the city of Alexandria, inexperienced and with out the protection of her parents, Mary later fell into a nightmare of a lifestyle. Mary carried on that terrible lifestyle well near her 30's, in those 17 years no one could seem to grab a hold of her and open her eyes and make her understand that what she was doing was wrong. One day a group of people had scheduled a trip to the Holy Land, to visit The Church of The Resurrection. Mary managed to get her place on that boat and they set off to the Holy Land. While on the boat though Mary kept sinning and making others fall into temptation, with violent fights, inappropriate gestures towards men and various slurs towards women. Upon arriving to the Holy Land the massive group set out to church, all of those who had come on the boat entered and felt the Grace of God take a hold of them. Mary not wanting to feel left out tried marching into the church triumphantly, but was stopped by an invisible force, she tried and tried and thus she drew to the conclusion that the Lord wanted her to repent for all of her sins. Thus she began to call out the Lord and asked for his forgiveness and swore she would turn her life around, by the door was an image of Our Blessed Mother she cried out to her and implored to her asking her to intercede for her before the Lord. At that moment she felt a cool breeze run through her and then she was allowed within the church. While in there she found her way to the tomb of Christ and prayed and cried tears of joy that she was forgiven, she left that church a new person. After leaving the church she went to the river Jordan and fasted and prayed she continued this for over 50 years, until her heart was a pure temple for the Holy Spirit. One day a monk living at the nearby Monastery of St. John the Baptist saw Mary in her old age praying by the river, he was amazed that when she was in deep prayer she could walk on the river as it were land and while on land she would be suspended up to 10 feet in the air and her eyes always fixed towards heaven. One day Mary asked the monk if he could meet her by the river in a year in order for her to receive communion, the year went by and the monk returned hoping to find Mary standing by the riverbed, but she wasn't. He found Mary dead in a cave and thus decided to bury the remains, alongside him was a lion whom helped him dig the grave and place the remains of the saint within. Mary died in the year 521.